Way back in February, The Blot alerted us that Kidrobot was planning to release a "Booster Gold" Dunny keychain. Well, The Blot has reported back to say that they're now available, just in time for Christmas shopping. 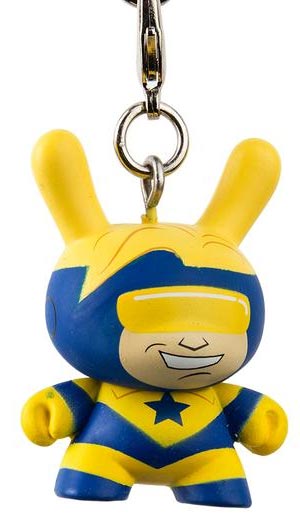 In time for the new Justice League movie, Kidrobot and DC Comics have teamed up again to shrink the Dunny down to small crime fighting size. Featuring all of the DC Universe's most iconic heroes and clocking in at 1.5" tall, these DC Dunnys are ready to stop villains in their tracks. Coming with a lobster clasp on a detachable ring, this Justice League adds a heroic accent to backpacks, purses, keys and zippers. Nab them all today and keep the villains of the DC universe at bay!

Kidrobot is selling them for $5.99 each, but sadly, they are packaged in "blind boxes," meaning you can't know which one you're going to get when you order just one. To be sure you get a Booster Gold, you'll have to order a whole display of 24 blind boxes. Or, you know, go to eBay.

Back in July, I discovered a Booster Gold customized vinyl figure called a Mighty Mugg. Turns out that a Mighty Mugg is only one type of customizable vinyl figure. Apparently, there are similar figures called Dunnys. They are like Mighty Muggs, but with ears. 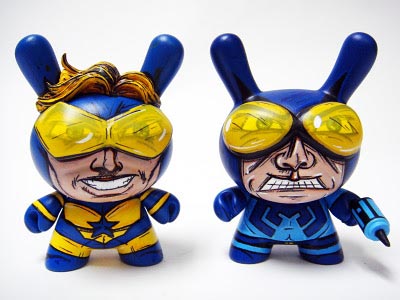 The above 3" Blue and Gold figures above were customized by an artist named Nikejerk. There's much more information about the pair of figures in Nikejerk's Flickr.com account. It is beginning to look like wherever there are customizable vinyl figures, someone is making a Booster Gold figure. That's a thought guaranteed to put a smile on your face.