It has been 66 Days since Booster Gold last appeared in a DCnU comic book.

In case you missed Booster's cameo appearance in Doomsday Clock #9 the first time around, you're getting a second chance with the second printing in stores today.

Or you could just look at these panels. 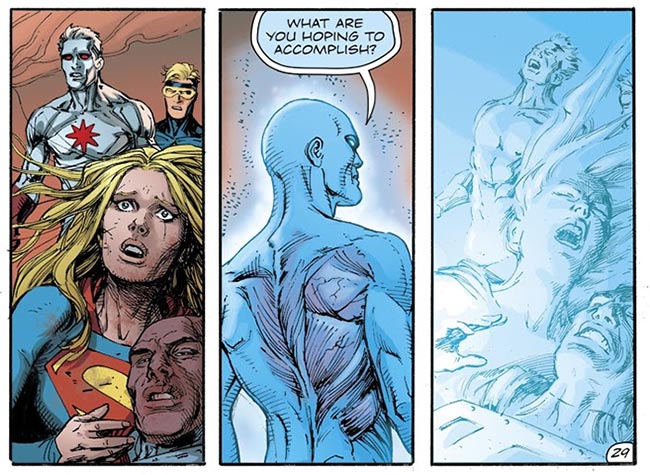 According to Chomicchron.com, the first printing of that issue — the ninth in the mini-series — sold 120,079 copies, which is more than any but the first issue of Heroes in Crisis. That means more people have seen Booster blasted by Doctor Manhattan than Booster accused of killing the Flash. I'd say that's a good thing.

Meanwhile, if you are in your Local Comic Shop today, let me recommend everything in DC's Wonder Comics line, especially Mark Russell's Wonder Twins. I wish Bendis paced his stories to let more happen in an individual issue, but Young Justice and Naomi are also pretty good reads. Skeets won't have a problem if you buy any of those issues.

Cort posted on Jul. 10, 2019 at 11:45 AM
Totally agree on Wonder Comics line. Been quite the treat. Slow, especially with Bendis pacing on YJ but fun all the same. I am really digging the new Dial H!

Tassajaramonk posted on Jul. 10, 2019 at 2:00 PM
I read the first 2 issues of Doomsday Clock even tho I hate the idea.
I really liked it despite my desire to dislike it.
Bold to start off where Watchmen ended like that.
Excited to see the next issues.
MORE BOOSTER!

Dan Jurgens recently spoke to Russ Burlingame about the 25th anniversary of the release of Superman/Doomsday: Hunter/Preay. Booster Gold played no role in that series, yet according to Jurgens, he sort of does.

Burlingame: It feels like, even though this is a very stand-alone book, the Waverider stuff plays into the bigger theme of the Linear Men at that time in the books, which is, "Do something, you jerks."

Jurgens: Right. It's weird, I think I probably didn't realize it at the time, but I look back at this now, and realize that what I was doing, I should say, was assembling a group of characters that I created that would function in that world. I think Jim Starlin did a great job of this. When he was doing Captain Marvel, when he was doing Warlock, he created all these characters. They became very much a part of his writing language, and his visual language. All that stuff existed to the extent that it was Jim Starlin-world. Now we see that times 5,000 on the screen. I think what I was doing was a lot of the same thing, which is I said that I have all these characters that interact and they make sense to me. They don't just have to interact once in November of 1992 and then we never see them again. We can use them to address different ideas and different topics.

They became very much a part of -- this is going to sound real egotistical, and I don't want it to-- it becomes part of like "Jurgensverse," as far as I was approaching Superman a little bit. It made sense to me. Whereas at that time, it might have been [convenience], I look back on it now a little differently. It made sense in a lot of different ways. These are the characters I wanted to continue to explore, and there was no reason they had to interact once and then not interact again.

Burlingame: And a lot of these characters and ideas you would continue to work with all the way up through the mid-2000s with your Booster Gold run.

Jurgens: Also, if you look at Waverider, which was a co-creation with Archie Goodwin, you have all these things that fit together and work. think it's a group of concepts that have been probably under-used by DC. I think there's a lot more than could have been done with it, and fortunately that stuff is still out there, so there's a lot more that can be done with it. I think concepts like the Linear Men, like Vanishing Point, and all that stuff, I think that's the kind of thing that has a place in comics. I think there's some cool things there that can still be exploited, still be used.

There's a lot to unpack in just those few paragraphs, and that's only a tiny snippet of the interview. (By all means, read the whole thing on ComicBook.com.)

The most important thing there, obviously, is that we should be calling Jurgens' oeuvre "The Jurgensverse," and that all the characters in it always were, and always will be, connected. That somewhere in 2019, Trixie Collins could pass Mitchell Anderson in the produce aisle of their local supermarket and give him advice on the best way to pick out a grapefruit, that thought makes me very happy.

It's also worth noting that Jurgens believes that Time Masters and their story-telling conceit of policing history remains an untapped source for future stories in the DCrU. That should be encouraging to fans of Booster (and Jurgens' work), as it means that the possibility still exists to revisit the characters and concepts (and unanswered mysteries) of Booster Gold Volume 2.

Here's to the future!

When I go into my Local Comic Shop today to pick up Wonder Twins #3, there's something else I'll be taking a look at.

For the second week in a row, DC is releasing a reprint of an event story that contains some Booster Gold. In fact, Booster has very important role in The Death and Return of Superman Omnibus. He named Doomsday. 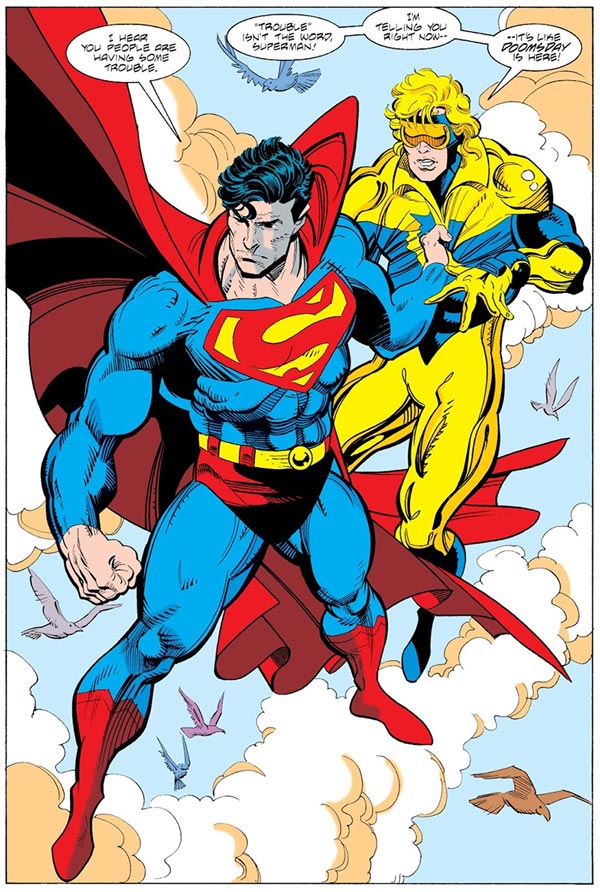 But perhaps you already own one of the previous Death of Superman reprints? Well, DC has given you another reason to buy this one. Says Dan Jurgens on Twitter.com: 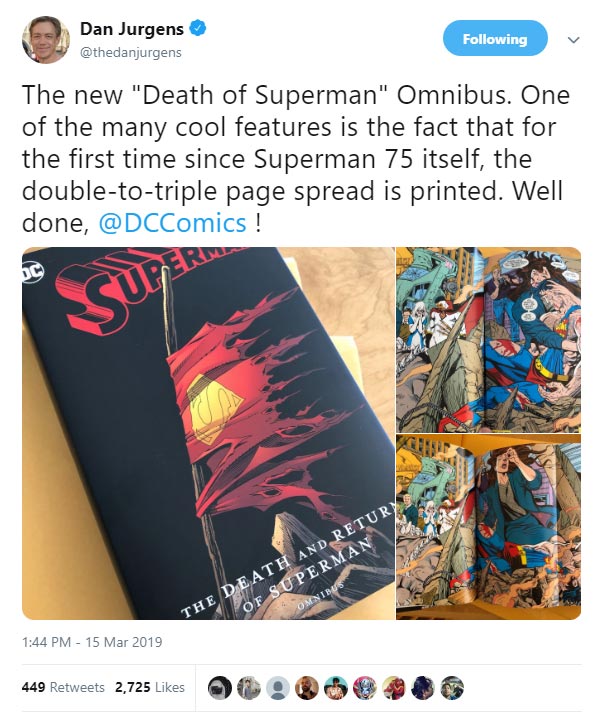 It's good to know that these omnibuses are reprinting the comics as they were originally intended to be read. That's cool, DC. Good for you. 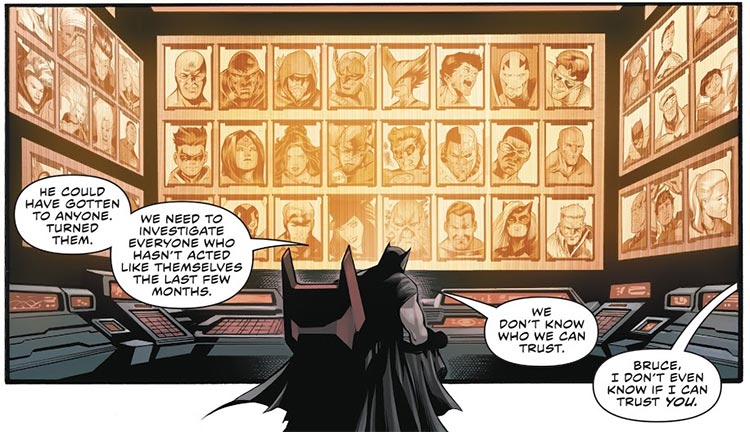 Ugly as the Day He Was Born

Last week, Russ Burlingame shared his latest commission from Drew Moss on Twitter. If you ask me, it's pretty terrifying. 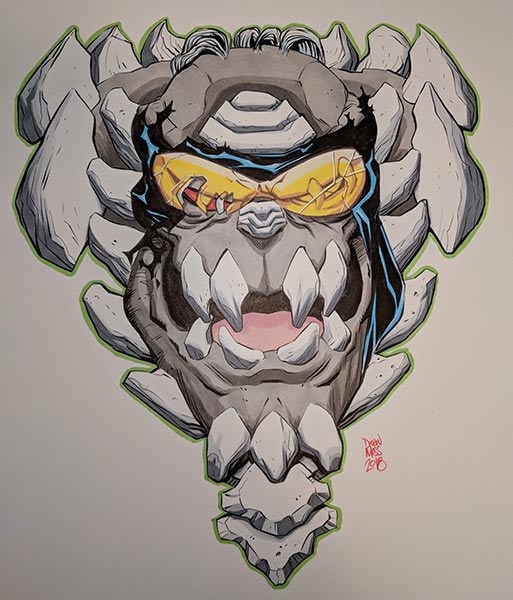 One of these days, Booster Gold is going to get the better of Doomsday. I hope I'm still around to see it.

Thanks for sharing, Russ.