The latest installment of The New Adventures of Blue and Gold (or, as some people call it, Justice League 3000 #14) is released today. The preview of the issue at A.V. Club gives the impression that this will be a very Ice-heavy issue with a hint of Fire. That sounds like something I want to read.

(By the way, the rumor of Justice League 3000's demise has been greatly exaggerated. After Convergence, the book will be reborn as Justice League 3001. Whether Booster Gold survives that transition remains to be seen, but I'm betting yes).

And while you're supporting your Local Comic Shop, consider picking up Futures End #41. Booster Gold can be found in the issue preview seen on Crave Online. While it's probably just a brief cameo, you don't want a hole in your Booster Gold collection, do you? (Thanks to MetalWoman for the spot.)

The first week of the new year brings us a new comic adventure teaming Blue Beetle and Booster Gold. I can already tell it's going to be a good year. 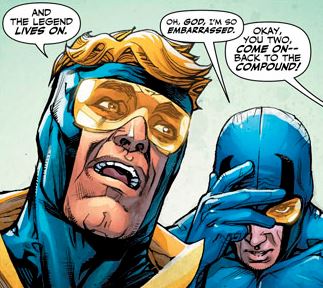 You can find a preview of Justice League 3000 #13 at CraveOnline.com.

The Booster Gold Nobody Knows

The big Booster Gold news from Comic-Con International is that there is no Booster Gold slated to appear in DC Comics.

First up is Zac Boone of Unleash the Fanboy:

A Booster Gold cos-player asked when he will get his title back. Answers were noncommital.

A Booster Gold cosplayer asks when Booster Gold's getting his book back. They joke that he's from the future, he should already know.

The same event covered by Mark Seifert for Bleeding Cool:

When asked about the rumoured Booster Gold monthly [Geoff Johns] dodged the question and stated that he wasn't allowed to say much but to talk to Dan Didio.

From these three reports we can be sure of two things:

This doesn't necessarily discredit Bleeding Cool's earlier report in May that a third volume of Booster Gold comic was "imminent," but it doesn't help their credibility either.

As if that's not enough bad Booster news, Lucas Siegel of Newsarama also confirmed that Booster will not be appearing in "Trinity War."

Any plans for Booster Gold? [Geoff] Johns, "We love Booster, but he's not in Trinity War. There is something in Forever Evil #1 that connects to him though."

The silver lining is that Booster Gold fans can save some money and stop buying the "Trinity War" crossovers now. See, Comic-Con wasn't a total waste.

Today at your Local Comic Shop you'll find the continuing adventures of Jonah Hex and Booster Gold in All-Star Western #21.

When we last left our heroes, they were returning to Red River Junction with the recovered gold and the sole surviving member of the Clem Hootkins Gang. But if the preview pages at CraveOnline.com are any indication, the trouble is just beginning for this odd couple.

If you're still on the fence about buying Booster's out of continuity Smallville adventures, take a look at the exclusive preview Crave Online has of the issue. It is essentially the first half of Smallville Season 3 #42, and not only has Booster and Skeets in action, but also the Blue Beetle!

Buy either the digital or print version of this story and make Skeets happy.