This Day in History: The End of Convergence

If you're starting to feel like tragic events are repeating themselves over and over, you might be a DC Comics reader.

That was 7 years ago today. 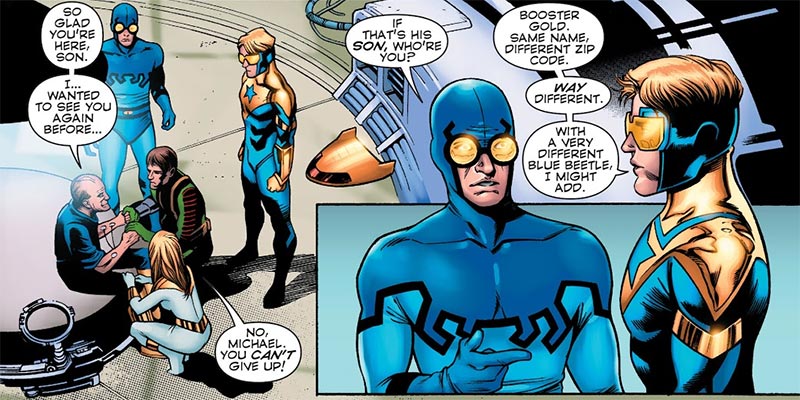 And it was also in the pages of Convergence Booster Gold #2 that the original Booster Gold died and was brought back to life as the newest Waverider. 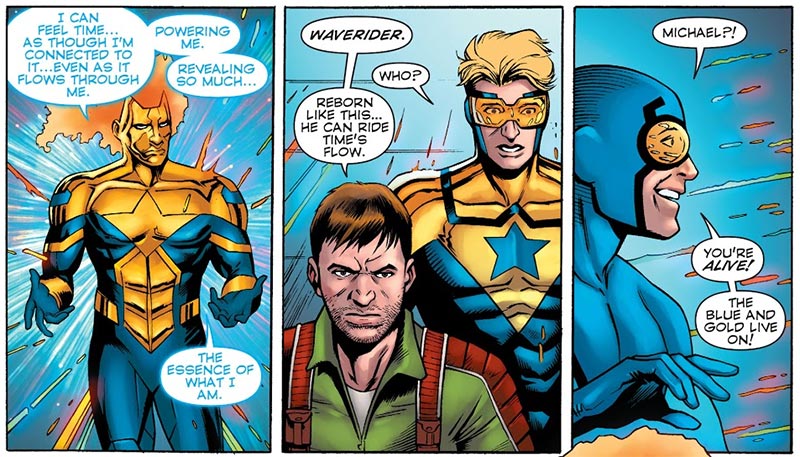 That happened just in time for Waverider to arrive and help save the day in Convergence #8, also released May 27, 2015. How did he help? By empowering Brainiac, the very same creature who had caused the Convergence in the first place.

The reality created by Convergence lasted barely a year before Doctor Manhattan's tinkering in DC Universe: Rebirth resulted in awkward merging the pre- and post-New 52 realities to create a whole new continuity lying somewhere in between, a reality that has since been revised in Death Metal and is again being challenged in this summer's Dark Crisis. 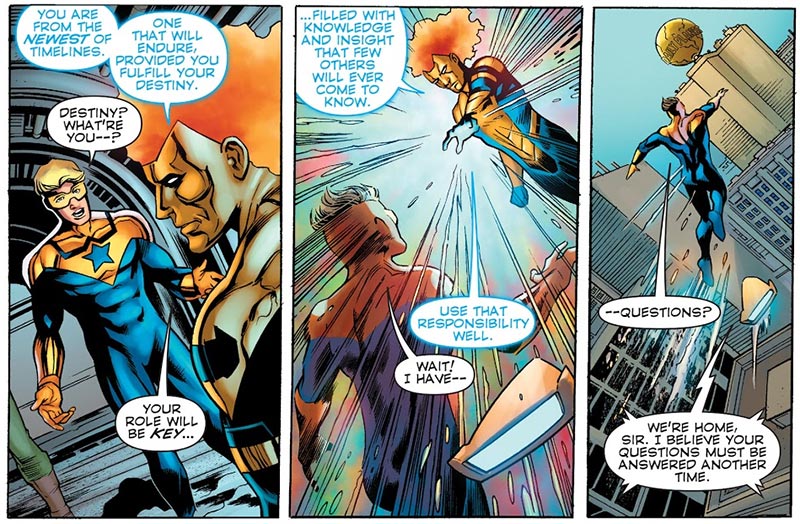 Like I said, sometimes reading DC Comics is like being caught in a cosmic hamster wheel of trauma, a wheel that seems to be spinning faster and faster the longer we're on it.

However, the important lesson isn't that the multiverse is full of evil. The lesson is that every time evil rears its head, heroes will emerge to fight it. 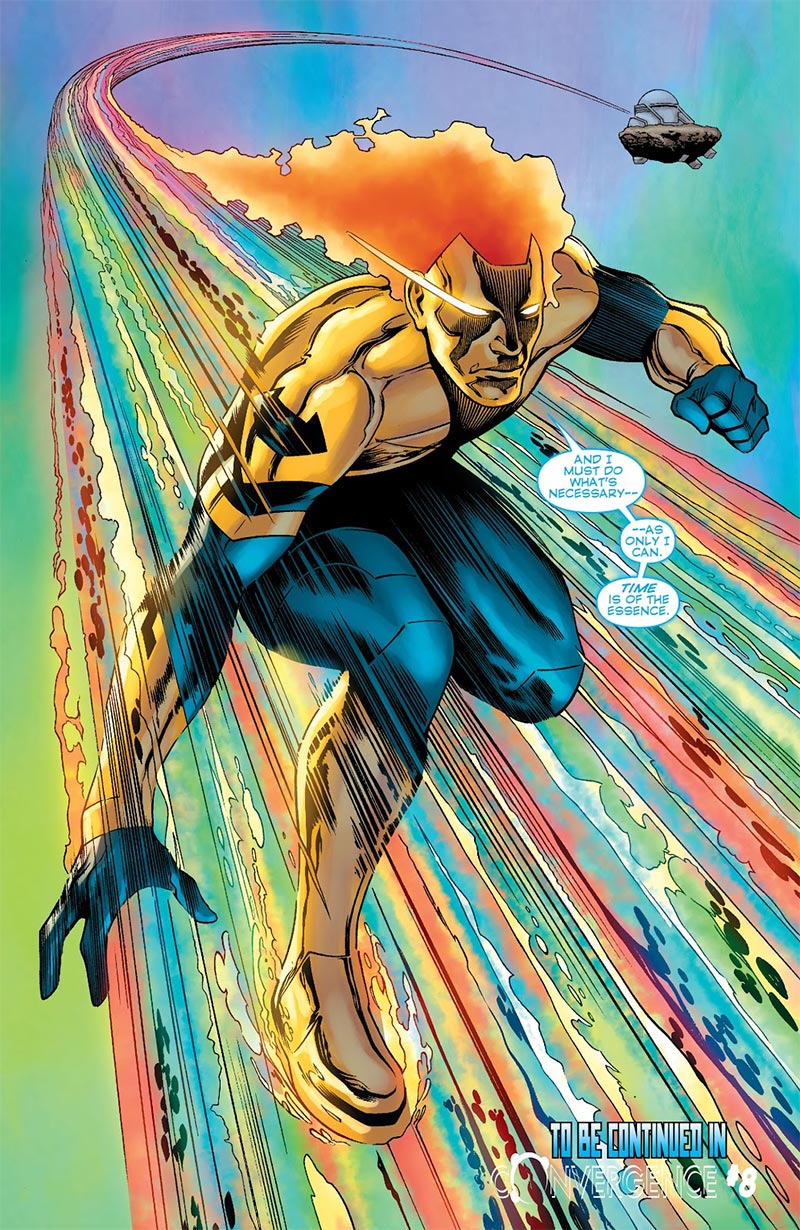 Such is life in every universe.

Morgenstern posted on May. 27, 2022 at 5:00 PM
I forgot about that story, but looking back, I think it felt like they changed Boosters part in it in the last minute. If I remember correctly, between the "deathmatches" none of captured realities could use any of their powers, except when Booster briefly shows up and he even makes a comment about soon having to be everywhere at once, sounding like would use time jumps or something to be present in all the different prisons, most likely to return their powers, in order to help them fight against Brianac.

Boosterrific [Official Comment] posted on May. 27, 2022 at 8:51 PM
It's true that the heroes had no power inside their prisons unless Booster Gold was (accidentally) present, but most of the main story takes place on Telos' artificial planet where everyone retained their powers. Booster's contribution to the larger event is limited to Booster/Waverider using his chronal energy to release Brainiac to clean up the mess that Deimos had made, all in the final issue of the series, CONVERGENCE 8.

Eskana posted on May. 28, 2022 at 1:38 PM
While I like the idea of giving heroes closure and an ending to their story... it just makes me sad to know that the classic Booster is sort of dead/in a new form. It just leads to that endless question of who is the Booster we have now (because if he was in the classic JLI then he isn't the N52 Booster,) and I know that "everything happened" now, but... it just doesn't make sense lol.
And not just in a time travel way.

Boosterrific [Official Comment] posted on May. 28, 2022 at 11:33 PM
I hear you, E. The only solace I can provide is to encourage you to try not to think about it too hard, and, if possible, enjoy what we do get.

If you've been trade-waiting for Booster Gold's Convergence appearances, your time has come at last.

Vote with Your Wallet

As someone whose hobby is tracking the minutiae of Booster Gold comic books, you can probably guess how I voted.

Last week's poll question: How do you feel about Booster Gold continuity? (48 votes)

Last night on The Daily Show, Jon Stewart poked fun at the many items presidential candidates are selling to drum up support for their campaigns. I instantly thought that Booster Gold could do a better job selling t-shirts and beer koozies than any of the dozen-plus candidates. But does an ability to hawk gewgaws actually make someone a viable candidate for President of the United States of America?

(By the way, no post tomorrow. Even Booster Gold takes a three-day weekend to celebrate American Independence Day!)

Tinuvial posted on Jul. 2, 2015 at 1:56 PM
I tend to dislike politics and Booster probably has a fairly diverse fanbase...if he gets into politics, some of his fans will pitch a fit, no matter what he stands for. Better to just stick with superhero stuff.

Fifty-five voters two weeks ago versus thirty-five this past week. I take that to mean that many of you aren't willing to settle for guest appearances.

Last week's poll question: If Booster Gold still can't get his own book in 2015, which type of guest appearance roles would you most likely support? (35 votes)

We've been told that continuity isn't important in the post-Convergence DCnnU ("DC New New Universe"). How do Booster Gold readers feel about that?

There Mite Be Gold Here 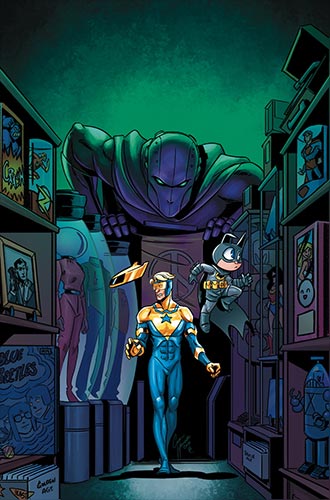 BAT-MITE #4
Written by DAN JURGENS
Art and cover by CORIN HOWELL
On sale SEPTEMBER 2 • $2.99 US

There's a new bad guy in town: Gridlock, the villain who's stuck in the past! And now, he's out to stop the future from coming! Booster Gold, the hero from the future, obviously can't allow that, but when he seeks Bat-Mite's help in finding this purloiner of progress, it doesn't take much of a prognosticator to predict that he's going to regret it.

Booster's first headlining role in the post-Convergence DCU comes courtesy of who else but Booster's proud papa, Dan Jurgens. And look: New Skeets!

You can see all the announced books (including the many, many Convergence collections, some of which contain reprints of Convergence Booster Gold) online at Newsarama.com.

UPDATE 2015-06-19: This is the second time in recent weeks I have accidentally let a post go early. I promise to try and be more careful from here on. So if you saw this post yesterday, please forgive this repost.

To make amends, I offer this bonus link to a Dan Jurgens and Corin Howell interview at Comicosity.com about Bat-Mite. The interview is light on Booster Gold references, but not everything can be solid gold, right?

Xylob posted on Jun. 18, 2015 at 11:07 AM
New Skeets = New Booster...
I'm not exactly sold on this version, he's kind of a douche.
I'll pick this up, but if they don't turn the character around soon I may be done collecting all comics Booster.

Brady Kj posted on Jun. 19, 2015 at 11:40 PM
You know, in what little I've seen of the new Booster, he seemed kind of bland and lacking in personality. If I'd read something where he was a douche, it'd actually be an improvement.
What have you read?