Yesterday, DC announced solicitations for the month of September, making it official that September 2012 will be the first month since November 2006 in which DC publishes no book including Booster Gold as a featured character. Even the best heroes need some time off every 69 months or so. 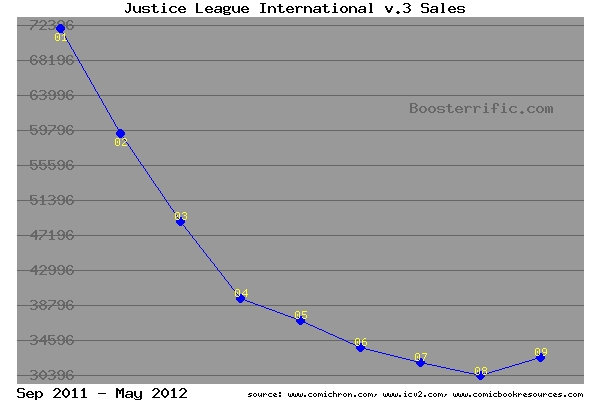 [Be aware that sales data in the graph above is not entirely accurate. In addition to unreported digital sales, sales priort to issue #9 were likely under-reported by up to 10% to account for estimated retailer returns. Therefore, it is unlikely that there was any significant sales upturn for issue #9. Unadjusted numbers for months prior to May can be seen at Comicbeat.com.]

It is important to remember that Justice League International wasn't canceled for poor sales alone. Many New 52 series are selling far, far worse. (For example, even with a guest appearance from the Booster Gold, Firestorm #9 sold almost half as many issues as JLI #9 did, and it still isn't canceled.) While expectations are certainly higher for Justice League titles, Justice League Dark has been selling only slightly better (+/-2,000 issues) than JLI, and it still isn't canceled. The evidence seems to indicate that DC has something else in mind for either the JLI or its star, Booster Gold.

Whatever the reason, I'll be saving an extra $4 come September.

The Irredeemable Shag posted on Jun. 12, 2012 at 8:31 PM
I'm thinking JLI was canceled so they can retool the JL books. Hopefully Booster will be part of whatever comes from that. I really enjoyed JLI every month. I'm sad to see it go. :(