You're Running Out of Time to Give Me Money

There are fewer than three weeks remaining in the SnarfQuest Tales Kickstarter campaign.

Since I last told you of this amazing opportunity to support Cellbloc Studios' video game based on the work of Larry Elmore, we've opened reward tiers to international donors! Don't let this pass you by!

In the grand tradition of Booster Gold, I am using this platform to promote my latest business venture: SnarfQuest Tales the video game on Kickstarter.com.

Some of you older Dungeons and Dragons and comic fans may recognize Larry Elmore's high-fantasy SnarfQuest comic strip as a long-running feature in Dragon Magazine. My friends and I at Cellbloc Studios are, with Larry's support, turning the comic into a point-and-click video game.

Remember when Booster Gold was given some bad advice by his trusted sidekick and lent his endorsement to Akteon-Holt pharmaceutical company? (See here for details.) Yeah, this story isn't quite that bad. Maybe it's more like that time that Fire destroyed Booster's plan to sell swimsuit calendars (as seen in Justice League America #71).

For reasons beyond my control, Cellbloc Studios has withdrawn our Kickstarter campaign for Dungeon Wars. There are certainly no super villains involved, just a bunch of well-intentioned people who realized too late that they were moving in the wrong direction in relation to one another. 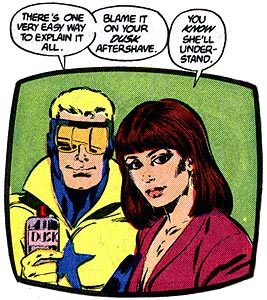 We do plan to re-tool the game and re-launch a fundraising campaign as soon as we can, probably after Christmas. (As you might expect, Christmastime is a bad time of year to ask for donations for a start-up video game company.) We do have other plans and unexplored opportunities and hope to emerge from this situation stronger than before.

I would like to offer a hearty thank you to anyone who donated or had considered donating to the aborted Kickstarter campaign for Dungeon Wars. I hope that you will consider joining us when we relaunch our project in the future.

In the true spirit of Booster Gold, I interrupt today's blog-cast to bring to your attention the Kickstarter campaign for Cellbloc Studios' video game Dungeon Wars.

Who is Cellbloc Studios, you ask? In it we are primarily several of the people I work with in my day job and me. We've decided to make a video game, and we're trying to scrounge up the capital to get the ball rolling.

If you've enjoyed the content at Boosterrific.com, please consider donating at least $1 to our Kickstarter campaign as a way of showing your thanks. I'd really appreciate it.

You may note that I've already changed the "real" ads here on the site to those promoting the Kickstarter campaign. They'll be sticking around for the duration. I'm sure I'll be mentioning this again before we reach the finish line on November 28. Sure, that seems like a lot of advertising, but don't you agree that's the way Booster would want it?

Morgenstern posted on Oct. 23, 2012 at 10:21 AM
Can you only pledge with a credit card? Most Europeans (even more so Germans) don't use credit cards. Is there a way to use paypal instead?

No credit cards? How... un-American. Sorry, M, but Kickstarter doesn't take PayPal. (This is because PayPal won't allow putting funds in escrow, a key component of the Kickstarter model.) I'll discuss adding a PayPal "donations" portal to the studio site with my co-workers. In the meantime, thank you for the sentiment. I'll see if I can't find some way to get my hands on your cash. ;)