The fifth Booster Gold adventure, Booster Gold volume 1, number 5, is the first time in this series that I really struggle to pick just one favorite page.

I love the confrontation on page 4 in which Booster Gold arrives like an angel only to have the Metropolis cops reject him because he "ain't Superman."

I also love the nearly wordless (but imperfectly rendered) emotional sequence with those same cops in the snow after Booster's apparent death on page 11.

And the panels on page 16 perfectly sell Booster's personal regrets about his mysterious past and give us a sweet Back to the Future-inspired emotional transition.

But forced to choose, I have to say that my favorite single page in Booster Gold #5 is Booster Gold driving the Boostermobile for the first time like those two parking attendants in Ferris Bueller's Day Off. Drive it like you stole it, Booster! 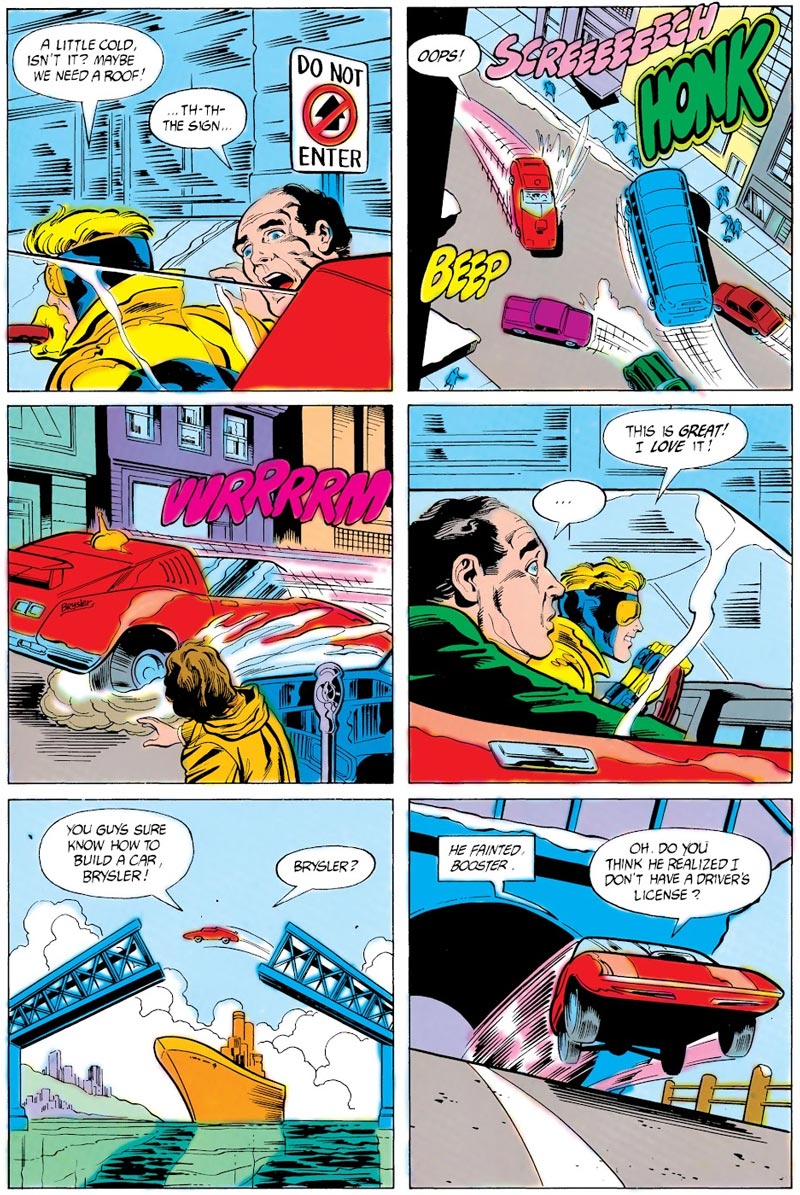 In a story built to compare and contrast Booster to Superman, this page is all about Booster enjoying himself doing something no responsible hero would (granted that the always responsible Skeets is in a position to take the wheel if necessary), in a for-profit licensed product no less!

He jumps a car over an ocean liner. I'd like to see Superman do that.

At long last, Blue and Gold #2 is finally available at your Local Comic Shop.

If you're the sort that needs a preview, you'll find one on AIPTComics.com.

And if you're the sort that thinks Blue Beetle's "all-new, bombastic, bodacious" Buggy is cool...

...let me remind you that it is no Boostermobile.

As you may have heard, the Batmobile from the 1966 Batman television show last month sold for over 4.2 million dollars (plus auction fees). That sounds like a fair price for the most famous one-of-a-kind car in the world. I can't imagine that there are many cars that would be more valuable, unless there really is a talking Knight Industries Two Thousand out there somewhere.

You know what car I'd rather have? A Brysler-Booster Mark IV. If I had a spare $4 million lying around, I would spend that money building Booster's signature automobile. (I'd say I'd spend that money on a time-travelling DeLorean, but I'm afraid I don't have the math background required to cobble together a flux capacitor.)

I love the open cockpit and the "Booster" striping. The most important part would be the custom interface for Skeets in the rear. While I'm sure that there are some who would like their robot co-pilot to be an R2 unit, I'd definitely take Skeets any day of the week — and twice for a Sunday drive!

If the Batmobile is your thing, you'd probably enjoy spending some time at BatmobileHistory.com. I have to admit, it's an admirably thorough catalog of the many, many Batmobiles used through history, including the model that Booster stole in Booster Gold, volume 2, #12.

Earlier this week DC Entertainment announced that they had partnered with Kia Motors America to create five one-of-a-kind customized cars featuring Justice League characters. The press release announced that these "radical machines" were created utilizing Jim Lee's Justice League designs in order to promote DC's "We Can Be Heroes" charity campaign. "We Can Be Heroes" supports of Horn of Africa hunger relief. The cars will be auctioned off later this year with proceeds going to the campaign.

When I hear "Justice League character" and "radical machine," I think "Boostermobile." However, given that DC's latest custom vehicles are destined for a charity auction, it's understandable that our favorite Corporate Crusader would be reluctant to donate his beloved Boostermobile to any cause that didn't profit Booster Gold.

These cars were unveiled Tuesday at the 2012 SEMA trade show in Las Vegas. While I gotta admit that a car show seems a good place to show off some sweet customized cars, SEMA shows are not open to the general public. If the goal of these cars was really to "raise awareness" of your campaign, DC, maybe you should try just driving them down the street instead.

Comments (0) | Add a Comment | Tags: boostermobile cars charities news we can be heroes