With appearances in Secret Six #36 and Titans #38, Booster Gold has shown up in a couple of series finales other than his own. In both of those issues, Booster's been on his own, his sidekick nowhere to be seen. So where has Skeets been? Having adventures of his own, apparently. 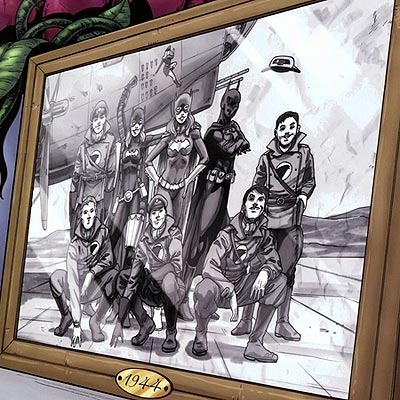 This picture was seen in the final issue of Batgirl #24 as part of a prolonged drug-induced hallucination. Unfortunately there is no evidence that Skeets -- who so rarely gets to leave Booster's shadow -- has actually been traveling through time with the three Batgirls and having grand adventures with the Blackhawks in World War II. But just because we don't have any record of it doesn't mean it didn't really happen. Skeets does have the ability to erase memories, after all.

PAGE 15 - Steph [Stephanie Brown] never did get to have an adventure with Cass [Cassandra Cain] during the pages of the book - this adventure/vision finds Batgirl Steph and Skeets on an adventure through time to find a wayward Booster, joined by Batgirls Babs [Barbara Gordon] and Cass.

Thanks to Morgenstern in the Boosterrific Forums for pointing out this panel.

JakeS posted on Aug. 22, 2011 at 6:39 PM
That is probably the neatest idea I have heard in a while. Maybe it will be published someday.

...what? No one is asking me too? Well, I might still do it anyway!