Time for a Healthy Breakfast

Booster Gold has been keeping a low profile since Convergence. You might assume that's because he's been busy fighting crime or protecting the time stream or taking a nap. But the real reason is because he's been scoring new endorsement deals!

Wake up with Booster Puffs Cereal! An all-new breakfast alternative for people on the go in today's DCnU, Booster Puffs are filled with some number of essential vitamins and minerals. Add to milk for a wholesome start to your day. (Booster Puffs contain some artificial color and flavors. If you develop a rash or hives, stop eating Booster Puffs and call your doctor immediately.)

You can get your own box of Booster Puffs in today's issue of Bat-Mite #3. You'll find a free sample at DCComics.com. The issue itself is now available at fine comic retailers everywhere.

The big Booster Gold news from Comic Con appears to be that Booster will be appearing in a future issue of Bat-Mite [IGN.com]. We didn't need a convention to tell us that. We read Diamond Comic Distributors' Previews. Booster will appear in Bat-Mite #4 in September.

Given that DC just unleashed a slate of new series, we hoped that Booster Gold might have been discussed in relation to another upcoming title. He wasn't. It seems The Year of Booster Gold is beginning to lose some steam.

For the second year in a row, I haven't managed to spot a single Booster cosplayer among the thousands of costume pics. Not to denigrate the costumes I did see — the costumes at Comic-Con are truly staggering in both quality and originality — but two years in a row without Booster Gold is pretty bad. We can't expect to see Booster make the jump back to television or movies if he's already so far out of the public eye.

But hope springs eternal. The year isn't over yet. There's still plenty of time for DC to springs some good news on us. So bring it on, DC. We're ready and waiting.

So there was at least one..though no wonder that there is not much BG cosplay at cons..it is not like there is a lot of BG in comics either

Boosterrific [Official Comment] posted on Jul. 13, 2015 at 4:34 PM
I saw pictures of someone doing THE DARK CRYSTAL cosplay. If people are dressing up as characters from a movie released 33 years ago, I don't think it is unreasonable to expect to find a Booster Gold or two out there among the legion of Batmen and Harley Quinns.

There Mite Be Gold Here

BAT-MITE #4
Written by DAN JURGENS
Art and cover by CORIN HOWELL
On sale SEPTEMBER 2 • $2.99 US

There's a new bad guy in town: Gridlock, the villain who's stuck in the past! And now, he's out to stop the future from coming! Booster Gold, the hero from the future, obviously can't allow that, but when he seeks Bat-Mite's help in finding this purloiner of progress, it doesn't take much of a prognosticator to predict that he's going to regret it.

Booster's first headlining role in the post-Convergence DCU comes courtesy of who else but Booster's proud papa, Dan Jurgens. And look: New Skeets!

You can see all the announced books (including the many, many Convergence collections, some of which contain reprints of Convergence Booster Gold) online at Newsarama.com.

UPDATE 2015-06-19: This is the second time in recent weeks I have accidentally let a post go early. I promise to try and be more careful from here on. So if you saw this post yesterday, please forgive this repost.

To make amends, I offer this bonus link to a Dan Jurgens and Corin Howell interview at Comicosity.com about Bat-Mite. The interview is light on Booster Gold references, but not everything can be solid gold, right?

Xylob posted on Jun. 18, 2015 at 11:07 AM
New Skeets = New Booster...
I'm not exactly sold on this version, he's kind of a douche.
I'll pick this up, but if they don't turn the character around soon I may be done collecting all comics Booster.

Brady Kj posted on Jun. 19, 2015 at 11:40 PM
You know, in what little I've seen of the new Booster, he seemed kind of bland and lacking in personality. If I'd read something where he was a douche, it'd actually be an improvement.
What have you read?

Convergence has killed the tyranny of the New 52, and humor can now return to the DC Universe! 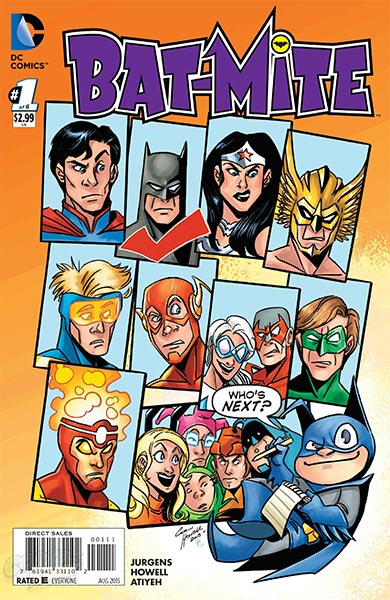 Booster doesn't show up inside this issue, but I'll give you good odds he appears before series end. (Dan Jurgens is the writer.) You can decide for yourself what you think by reading the preview online at ComicVine.com.

Boosterrific [Official Comment] posted on Jun. 3, 2015 at 11:30 PM
I always run "New Release" items on Wednesdays because Wednesday is the day that new comics go on sale. This book is now available. (I have a copy sitting in front of me. I enjoyed it even more than I thought I would.)

This Day in History: World's Funnest

Whenever Mr. Mxyzptlk and Bat-Mite get together, things have a tendency to get out of hand. For instance, take their meeting in Superman and Batman: World's Funnest, released 13 years ago today.

That tiny panel behind Mxy's hat above is Booster's (and Skeet's) only appearance in this issue, but don't let that deter you from enjoying this parody of traditional DC Comics stories throughout the ages, assuming you can find it in the back-issue bin of your Local Comic Shop.