Today I'm hijacking my own blog in promotion of my latest novel, a cozy murder mystery in a fantasy setting, Apprentice to Murder: The Tale of Robin the Rascal in the Wizard's Own Words. 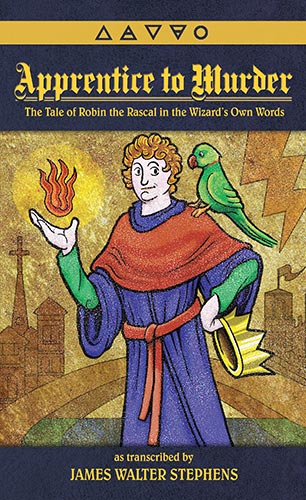 According to the book cover (which I also wrote):

Life is easy for young Prince Robin. Growing up with the luxuries afforded members of the royal family, he dreams of one day becoming a knight like his late father. But the young nobleman’s dreams are derailed when his cousin, heir apparent Prince John, dies under questionable circumstances. Fingers quickly point to Robin, who inconveniently happens to be the next in the line of succession and the last person to have seen John alive.

To prevent civil war, Robin abdicates his birthright for an apprenticeship under Royal Wizard Septimus. Robin’s sacrifice saves the kingdom, but one by one, the inhabitants of Windwick Castle begin to die, each new death seeming to further incriminate the fallen prince. The only way for Robin to save himself is find John’s real killer.

The apprentice wizard is going to learn the hard way that even magic has its limits.

If you'd like to read more, the first chapter is available for free at JamesWalterStephens.com.

And if you like what you see there, the book is now available as both a $15 paperback and a $2.99 ebook on Amazon.com.

Thank you for your consideration.

Jordan N. posted on Dec. 5, 2020 at 5:32 PM
I love a good mystery, and that sounds like such a unique premise and setting! I will definitely check it out thank you for sharing about your work! And thank you as always for this excellent website!

Boosterrific [Official Comment] posted on Dec. 6, 2020 at 2:32 AM
As always you are welcome, Jordan. I hope you enjoy the book.