1986 Most Important Year in Superhero History

Vulture.com has posted an article by Abraham Riesman titled "The Single Most Important Year in Superhero History Was 1986." Riesman writes

But 1986's legacy was cemented by products belonging to the super-set, in particular four introductions to the canon: The Dark Knight Returns, Watchmen, the conclusion of Crisis on Infinite Earths, and the rise of the concept of the permanent crossover event.

It seems to me that Riesman is missing one key event: the debut of Booster Gold.

Riesman credits some of those other books for introducing the words "grim" and "gritty" to the comic book reading audience, but it's undeniable that Dan Jurgens' criminal-turned-self-promoting-hero was a creature just as ahead of his time. It just took Booster a little longer to earn his recognition.

Obviously, Riesman is excluding Booster on a technicality. The first issue of Booster Gold, despite being cover dated February 1986, was actually released in 1985 (to comic shops in October and newsstands in November). I'm sure that must be why Riesman failed to mention our favorite hero.

Anyway, if you like opinionated think-pieces on comic book history, you'll find the whole article at Vulture.com. (It's worth reading the comments just to see American Flagg!'s Howard Chaykin's complaints about what else Riesmans' history of 1986 is missing.) 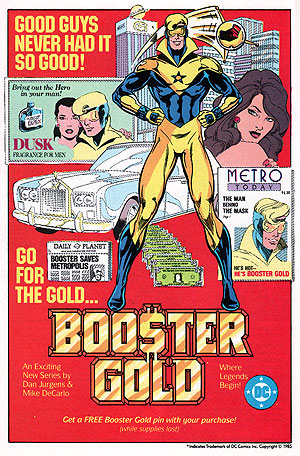 I've decided I need to add all issues from 1985-1986 containing DC house advertisements for the original Booster Gold series to the database here at Boosterrific. (It was an early decision not to include them, and I'm just now reversing myself.) I know that the ad was a DC house ad that ran in books cover-dated February 1986. However, I don't know if it ran in every book that month. For example, the DC house ad on page 12 of Booster Gold #1 that month was for 'Mazing Man. Therefore, I need to put my hands on every book released that month and confirm its presence. The following books have been confirmed to carry the house ad:

If anyone of you out there reading this were to come across any other issues, please let me know. You will, of course, receive proper credit for any instances that you turn up that are not already in the database. Thanks for the help.