The prolonged Internet outage earlier this week has me rethinking the way I do things here at Boosterrific.com

As you know, I don't normally post on Thursdays. But I wanted to post as soon as I was able on Tuesday, and I didn't want to crowd that with a new post, so I waited to follow up until today. Two days a week seems an appropriate posting pace for the amount of new Booster Gold news we've had lately, and I think from now on, Tuesday and Thursday are going to be the new posting schedule.

While I'm at it, it seems like a good time to go ahead and change a few other things.

It's been bothering me lately how I've chosen to manage continuities. In the wake of Infinite Frontier and Generations: Forged, it seems that there are no longer individual continuities in the DCU, but a single, unified continuity. So from now on — or at least until DC changes things again — all separate continuities will be combined into a single stream. That's right, Boosterrific.com now considers every Booster Gold appearance to be canon.

Also, I've decided that the way I handle images on the site is a little old-fashioned. Rather than using smaller static images originally designed to pass easily through dial-up connections, it's time to start moving to a more modern, full motion video format that's so popular with today's broadband audiences. These videos have the additional benefit of audio tracks, which I will be able to release as podcasts, as is all the rage.

But that's not the only concession I will be making for the modern Internet generation. It's well past time I finally embraced the emoji. In order to make this site more inclusive to fans of all ages, all written content will be composed entirely of emoji pictographs from this point onward!

New Release: The Other History of the DCU 3

I'm back! And so is Booster Gold!

Booster booster Logan spotted our hero in the pages of today's The Other History of the DC Universe #3. It's a sight you may recognize. 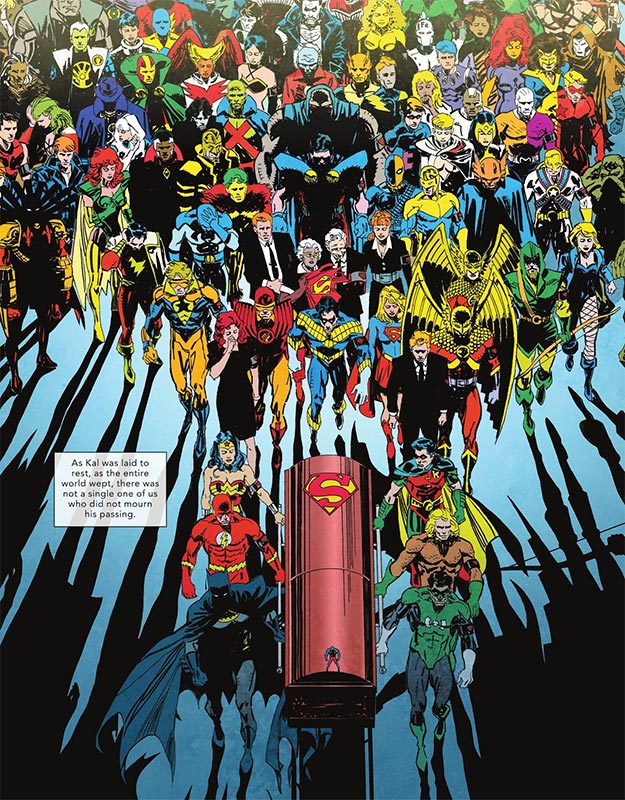 This was the poster by Dan Jurgens and Brett Breeding released with Superman #75. It's meant to represent the entire DC Universe. To writer John Ridley's credit, that's how it is used in this issue.

When you head to your Local Comic Shop to pick up this cameo appearance, you may want to be aware that elsewhere, Gold Beetle is in Flash #768. Cameo appearances for everyone!

Skeets thanks you for your support.

Sorry, Booster boosters, but Boosterrific.com is no match for an angry mother nature.

A tornado came through my town at midnight last night, doing considerable damage. My family is fine. There have been no deaths reported as I'm typing this — let's hope that stat holds — but cable/Internet service bought it, limiting me to what I can post from my phone.

New posts will resume next week — weather permitting, of course. In the meantime, everyone go hug your families and count your blessings.

UPDATE 2021-03-29: Still no estimate on Internet restoration. The utility company says they're working on it, so I wait as patiently as I can manage.

By the way, I'm sad to report that the stat didn't hold. One man died in the immediate tornado aftermath. Local news says he was trying to make his way through the destruction on foot (as the roads were all blocked with fallen trees) to reach his daughter's house when he had a heart attack.

Tragedy like that sure puts an Internet outage in perspective.

Don't worry about us online fans; we will still be here while you focus on more important things for the near future.

May the Lord provide for you and help you through whatever trials you are facing.

ithildyn posted on Mar. 28, 2021 at 2:25 PM
I am glad to hear you & your loved ones safe. Sorry for your town. Take care and all the time you need to recover from this terrifying ordeal.

Do They Even Make Comics Anymore?

GamesRadar.com has the list of DC's June 2021 solicitations... and it seems slim. Counting reprint collections and hard covers, it looks like DC is planning to release only 73 total books in the entire month. (Eighteen of those — nearly 25% — have "Batman" or "Detective Comics" in their title.)

So setting aside previously announced trades (we're currently still expecting a Superman reprint collection in June), the bad news for Booster Gold is that there is no sign of our hero in the solicitations through the end of spring. Has our hero gone AWOL? What will we read in the meantime?

Also missing is Dan Jurgens, who hasn't had his name publicly attached to anything at DC since the cover to Infinite Frontier. (He's drawing the Heroes Reborn: Marvel Double Action due in June for Marvel.) Since Booster historically is most likely to show up in Jurgens' work, this bodes ill for our hero in the short-term future at least.

Ariel posted on Mar. 24, 2021 at 9:09 AM
I had commented some time ago that it was unlikely that we'll have more Jurgens work on DC for the time being.

This is a pity because he is the only one that seems to correctly understand Booster Gold.

Even worse is the fact that Jurgens is the one that have the answers to BG vol. 2 unsolved plots so those answers seems unlikely to ever been addressed.

The One With Beetle's Blind Date

What happens when Booster Gold, Fire, and Flash go for dinner together? I'm glad you asked.... 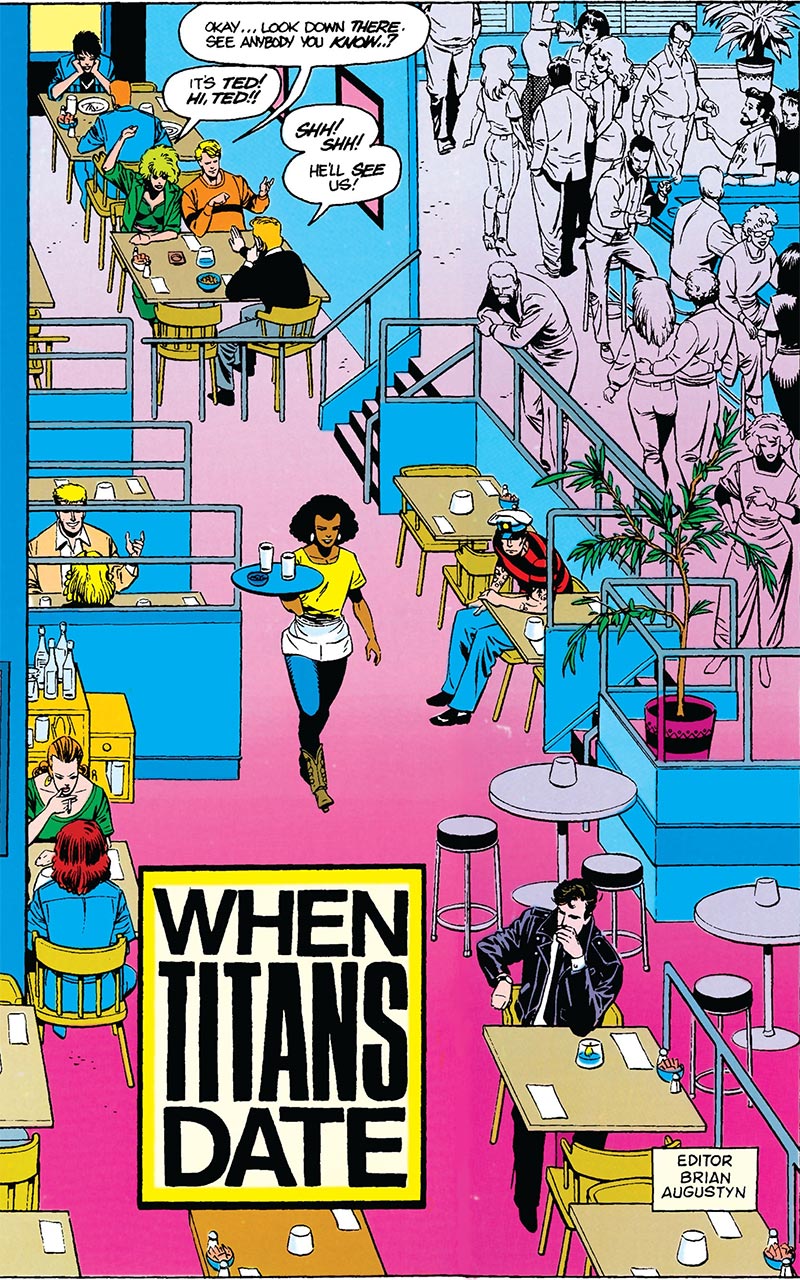 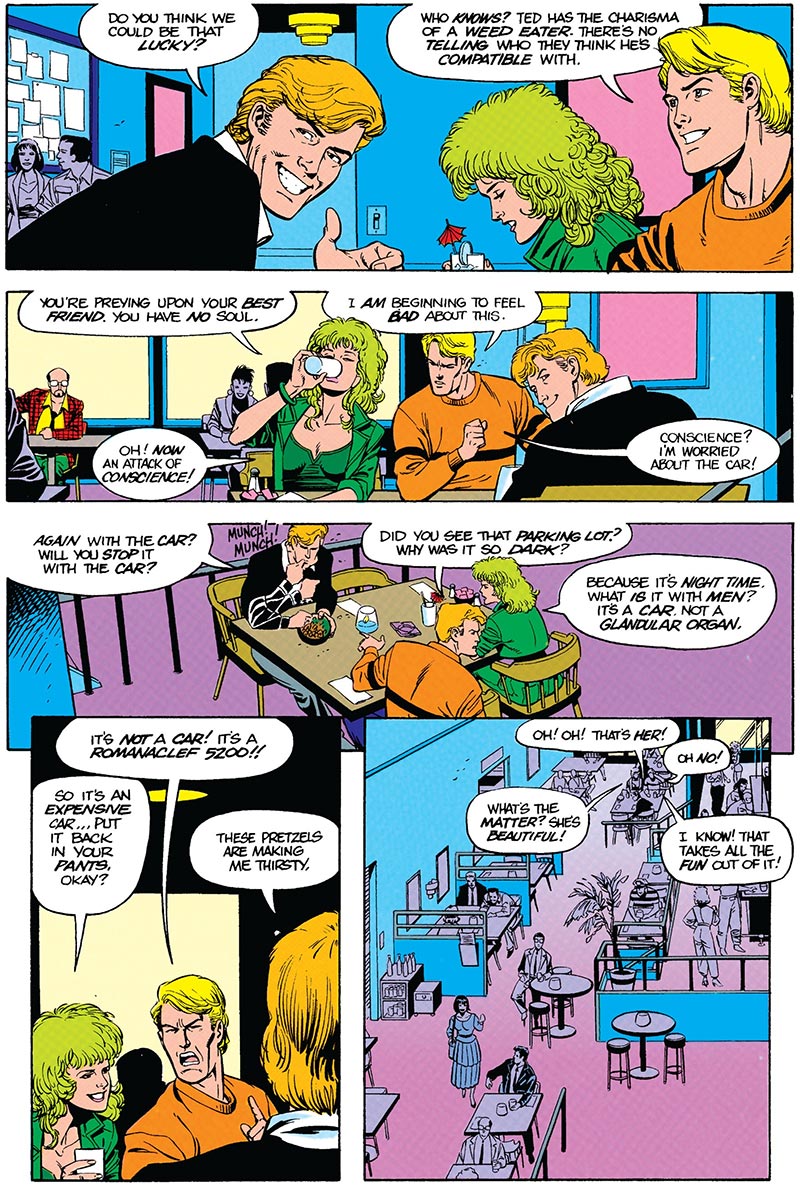 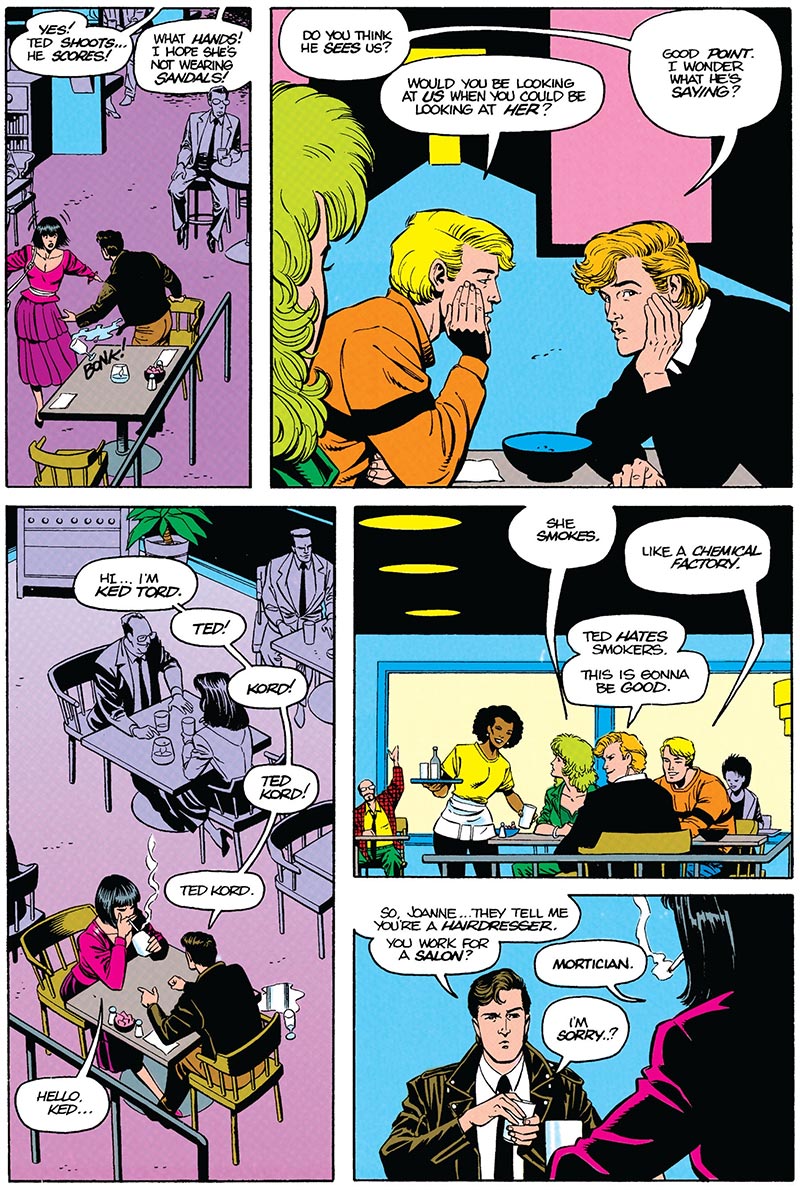 Yes, Wally, that is the Tattooed Man.

"When Titans Date" was created by Mark Waid, Ty Templeton, and Karl Kesel for the fourth story in the Justice League Quarterly #10 anthology.

I loved it when it was first published in 1993, and I love it even more now. It works on so many levels. On its surface, it's a situation comedy. Dig a little deeper, and it's an exploration of its characters' insecurities. Will Ted ever find love? Is Booster losing his best friend to a *gulp* girl? Can Wally relax long enough to enjoy a meal? How does Bea deal with constant sexual harassment from jerks like that bald guy in the red jacket?

Track down a copy of Justice League Quarterly #10 — the one with an angry Booster Gold on its cover! — and find out how this story ends.

Cort posted on Mar. 22, 2021 at 1:31 PM
Quarterly #10 is just packed full of some of my fave stories. The Beetle date night is so good and so in-character. Few comics have scenes like that. I always appreciate how character driven JLI era really was at times.

Kevin posted on Mar. 23, 2021 at 11:55 AM
I got into comics late in life. I started with the weekly event 52 and loved Booster in it. Then in my first exploration of a back issues bin I came across this book. I bought it solely for the cover. It's still one of my favorite covers of all time. This issue introduced me to the JLI. I now hunt down anything with the JLI or Booster, it's been a fantastic adventure! I even met Ty Templeton a few years ago at comic con and asked him to sign it. We then talked about Booster Gold for several minutes (until a line formed behind me).

Boosterrific [Official Comment] posted on Mar. 23, 2021 at 12:45 PM
I didn't praise Templeton's at in the post, but I sure should have. He's been one of my favorite artists since his time as inker on BOOSTER GOLD v1, and he's a large part of why this particular story works so well. (I suspect that the fellow in the red jacket is a self-portrait.)