A Mayfairstivus for the Rest of Us! Day 7

No role-playing game set in an alternate universe would be worth playing if it didn't at least attempt a rule system to explain the behavior of the "supernatural" powers and abilities of the universe's inhabitants. Of course, DC Heroes used MEGS rules to control the interaction of the players within the artificial environment. That means that every person, place, and thing that the players may encounter within the artificial universe of the DC Heroes universe must be adapted to the MEGS rule system. The Mayfair game designers did not let the players down.

Several sourcebooks were published to explain and expand the DC Heroes environment. In addition to new ready-made characters, these books contained rules, equipment, and locations designed to replicate the bizarre and sometimes impossible nature of the DC Universe as found in the comics. Of specific note to Booster Gold fans is the 1993 DC Technical Manual. 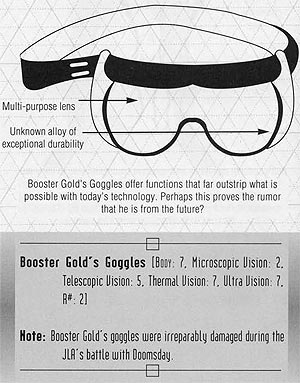 The DC Technical Manual, written by Jerry A. Novick, was an extensive look at the equipment used by the science-based heroes of the DC Universe. It includes such a variety of items as Deadshot's Wrist Magnums, Starman's Cosmic Rod, and the Blue Beetle's Bug. And it also spotlights Booster Gold's futuristic equipment, both in flavor text and some simplified, technical-style drawings. 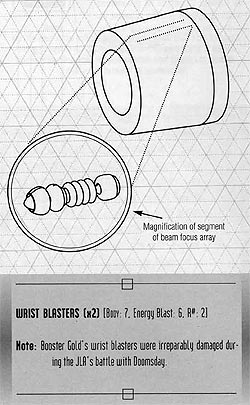 The sourcebook, subtitled the S.T.A.R. Labs 1993 Annual Report, presents its supplementary information from the point of view of a 20th-century scientist. While this makes the sourcebook a more interesting read, it also makes it a less useful role-playing tool. As a result, the book offers very little insight into the actual workings of Booster Gold's futuristic equipment. It is not, however, without it's merits.

Equipment detailed in this sourcebook was considered an update to previously printed material. For example, Booster's powersuit, which was detailed in the All That Glitters module, but here it is twice as strong and sturdy as previously presented. In keeping with rules updates, all of Booster's equipment now has a Reliability Number (R#), indicating how durable that equipment is. The lower the number, the more reliable the equipment. Not surprisingly, all of Booster's equipment has a Reliability Number of 2, the lowest possible number.

Frank posted on Dec. 8, 2010 at 2:49 AM
I wasn't aware this technical manual existed, but I find its specificity delightful!