We're still learning about what DC's summer crossover Dark Crisis event will be. We've seen pictures of Booster Gold in June's Dark Crisis #1 and Young Justice: Dark Crisis #1, but thanks to aipt.com, we can now be pretty sure he'll be making at least a cameo appearance in May's Dark Crisis #0 Free Comic Book Day Special Edition:

You'll note that Booster Gold is included in the Brad Meltzer-era group and not the Giffen/DeMatteis-era Justice League International group. I can only assume that's because Booster was not on Kevin Maguire's 1987 cover of Justice League #1 (because he wasn't on the team yet).

But not only was he not a member of the 2006 relaunch, he also wasn't on the Ed Benes / Maria Benes / Alex Sinclair 2006 cover of Justice League of America #1. At least not at first.

See, these are the two "standard" covers of Justice League of America #1 which were distributed equally:

You can see for yourself that Booster Gold isn't on either one. However, he *was* on the solicited cover, which included many differences from what eventually appeared on comic shop racks: 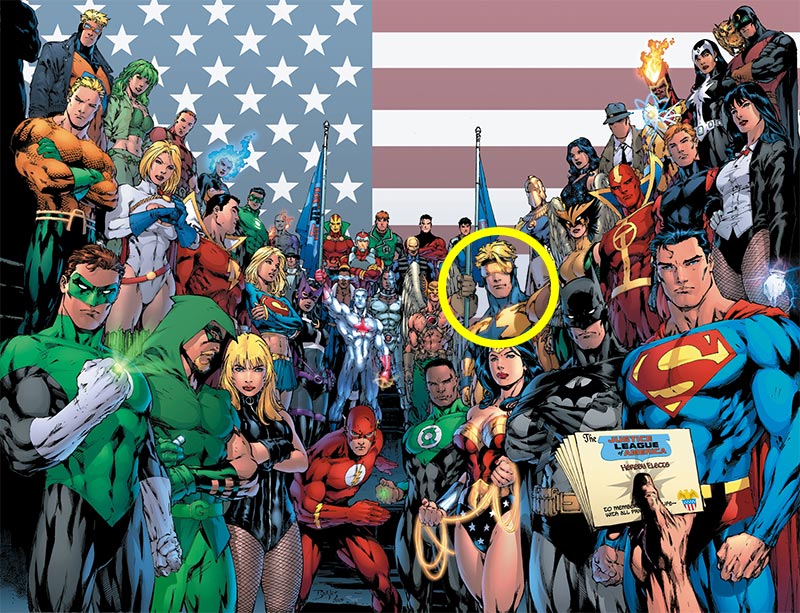 The solicited art was finally used on the second printing of that issue. If I were the guessing sort, I'd assume that when creating the art for Dark Crisis #0, artist Cheung had access to the solicitation image, and that's why Booster ended up where he ended up in the gallery pic above.

Or maybe Dark Crisis is changing the DC Multiverse (again) and now Booster was a active member during that era of the league.

Either way, Dark Crisis #0 will be in your Local Comic Shop this Free Comic Book Day, Saturday, May 7.