Now available at your Local Comic Shop is Harley Quinn Volume 5: Hollywood or Die, collecting the complete "California or Death" story from Harley Quinn #70 through #74. It's a lampoon of a the Hollywood detective noir genre (think The Big Sleep or Chinatown or, maybe more appropriately, Dead Men Don't Wear Plaid).

The best part is that Booster Gold has a starring role as the romantic leading man! 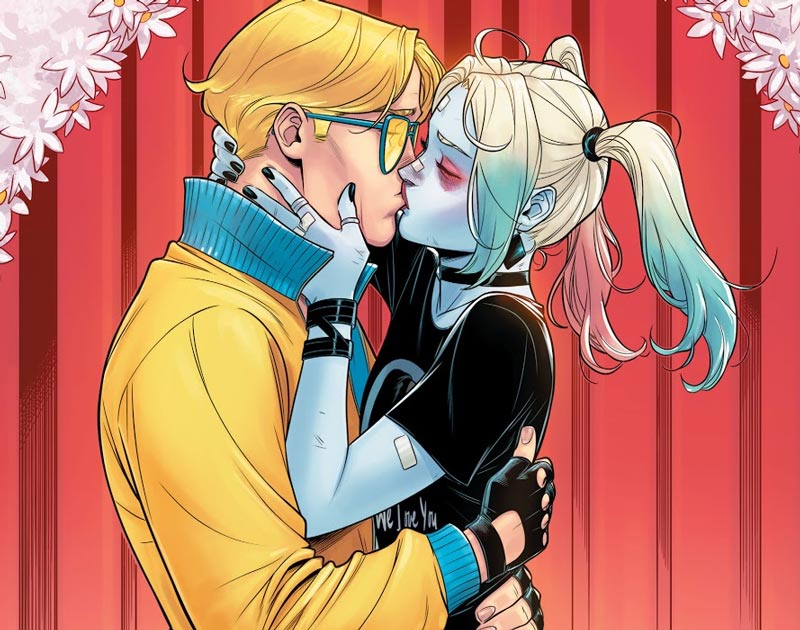 *gasp!* They're not wearing masks!

If you didn't see the fireworks between these two lovebirds the first time around, it's because you're a rational person who recognizes a bad mismatch of personalities without being hit over the head with a giant mallet now's your second chance!

To give the story fair credit, if you didn't know anything about Booster Gold or Harley Quinn before reading this, I'm sure you'll find it actually quite charming. Sam Humphries builds a passable DCU mystery story with a grab bag of endearing characters, and Sami Basri's art sells a lot of punchlines, both comedic and pugilistic.

But still, some characters simply shouldn't be used in some plots, knowwhatI'msaying? This story came out only months after Heroes in Crisis established a very different relationship between Booster Gold and Harley Quinn. Can you imagine if The Fugitive had ended with Dr. Richard Kimble kissing the One Armed Man? (The Fugitive. That's a show kids watch these days, right?)

As always, Skeets encourages you to buy any comic that features Booster Gold this prominently.

ithildyn posted on Apr. 14, 2021 at 12:43 PM
I am sorry to say I got exactly zero of your movie/show references, but don't you fret, it can probably be chalked to the fact I am not American and that English isn't my first language. Also more of a bookworm than a cinephile (or... teeveephile?). The Kids These Days might still get it!

Boosterrific [Official Comment] posted on Apr. 14, 2021 at 3:12 PM
My personal affinity for THE FUGITIVE is largely but on the fact that its format -- a doctor condemned for a crime he didn't commit wanders from town to town doing good deeds as he seeks a solution to his problems -- was essentially the same as one of my favorite shows of all time: THE INCREDIBLE HULK. (I'm all about the comic books.)

Michael Stalans posted on Apr. 14, 2021 at 6:15 PM
I was quite surprised when I saw both Booster and Harley teamed up, but my mind went nuclear when I saw them kiss.

Jordan N. posted on Apr. 16, 2021 at 6:33 PM
Ha! That's a great reference to The Fugitive and drives home your point. It was already an odd pairing but coupled with the story told in Heroes in Crisis, it is even more bizarre. Your crossed out statement hits it home pretty perfectly!

And yet, in an odd way, I almost actually like the pairing in an "elseworlds" sort of way. Ever since the New 52, we were given a Booster (and a Harley for that matter) who no longer fully resembled the character we had been following. My preferred Booster will always be the Time Cop and the trajectory he was on (and I never liked the costume redesigns for Harley -- I still prefer the red jester's outfit of the Batman Animated Series and that incarnation of the character). I'm stuck in the past, I know. But in a bubble, just in the context of that book and that storyline, divorced from the rest of the context of modern DC and New 52 Harley's entire schtick and the memories of the past, it seemed like a cute pairing.