The life of any comic book hero would be a lonely one if not for the many characters who have made up their supporting cast. Just as Superman has Lois Lane and Batman has Alfred, Booster Gold has also shared his adventures with quite a few people over the years. Today we look at one of those, Skeets.

Most heroes select a sidekick to help assist them in their heroic mission. Not Booster Gold. No, he wouldn't even *have* a heroic career without the assistance of his robotic sidekick, Skeets.

Skeets, a BX9 Security Robot, was Michael "Booster" Carter's co-worker at the Space Museum in the 25th century when Booster got the idea to steal a time machine and travel into the past to begin a life of super-heroics. Realizing he would need help, Booster added to his list of crimes by also kidnapping Skeets. 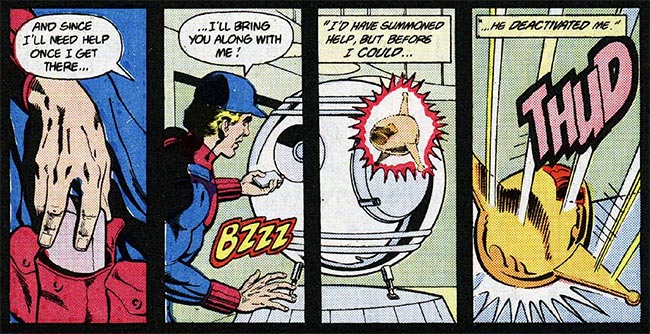 Rather than resent being displaced from his own time, Skeets embraced the opportunity for a first-hand observation of what to him was ancient history. Using his database of cultural knowledge, Skeets aided Booster in assimilating into 20th century culture, including supervising his tactics on the way to establishing Booster Gold as a powerhouse of both business and crime-fighting.

Due in part to Booster's immaturity, their relationship remained largely one-sided. Though Booster called Skeets a confidant, the robot was often treated exclusively a coach and mentor. When Booster left Metropolis to join the Justice League International, he deactivated Skeets and had him placed in storage, consulting him only on rare occasions when he needed access to 25th-century knowledge or technology. Despite this mistreatment, Skeets held no ill-will towards his former kidnapper. When Blue Beetle used alien technology to replace Booster's 20th-century power suits, Skeets voluntarily became the new suit's operating system, reuniting Booster and his sidekick in an unorthodox way. 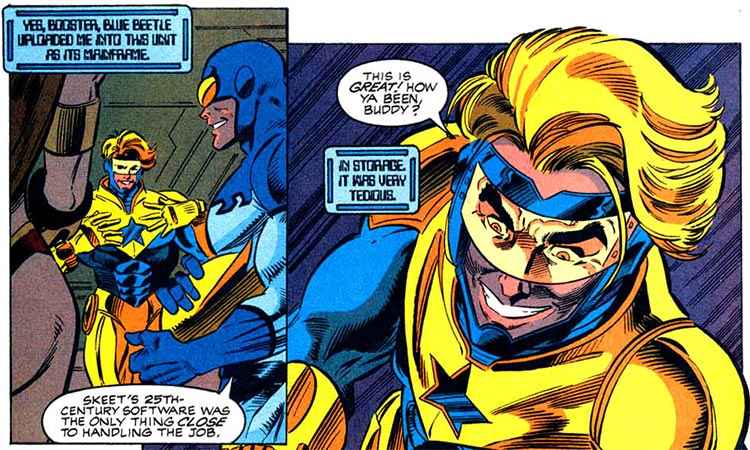 This coupling of sidekick and powers would last through several different super suits. However, when Booster rejoined the Justice League International's successor group, the Super Buddies, Skeets was once again left behind. At least this time, Skeets was allowed to go his own way. The two drifted apart, and it would be at least a year before Booster learned that Skeets had been captured and disassembled for parts by Maxwell Lord's anti-hero Checkmate organization.

Though the details remain a mystery, Booster Gold traveled through time and repaired his robotic friend, this time using the body of a 25-century valet robot. Thanks to the timely intervention of Rip Hunter (with an assist by Doctor Magnus), Booster was able to save Skeets from a second destruction by Mister Mind in an adventure that led to Booster and Skeets joining Hunter in his mission to protect the correct course of history. To this end, Skeets would take on more responsibility (and power), eventually leading to evidence that he was transcending his original programming.

Whether or not Skeets was truly evolving is a question left unanswered following Doctor Manhattan's meddling in the continuity of the DC Universe. In the aftermath, a new Booster Gold emerged accompanied by a new Skeets, this time an SKS-1 prototype soldier's assistant. The new Booster is less mature than ever before. Thankfully, the new Skeets, in addition to being even more powerful, is also more independent.

Perhaps this third time around, Skeets will finally get the respect he deserves as Booster Gold's equal partner and not just another sidekick.

For a bit of insight into what Dan Jurgens was thinking when he created Skeets, see my Secret Origins interview. You can also click here to read my post from April 24, 2015.