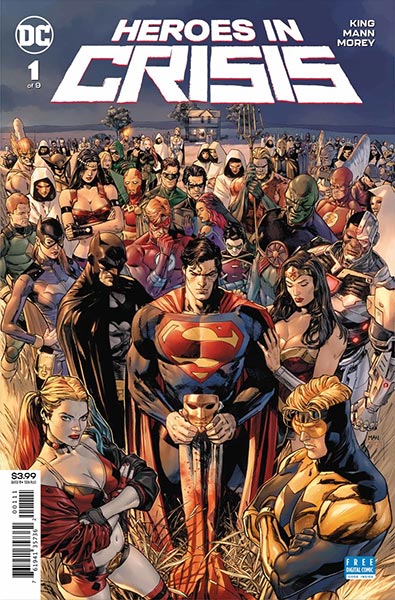 A preview of Heroes in Crisis #1 is online at DCComics.com.

As you can see on the cover above, the series' limited run has been extended from seven issues to nine. Per Friday's announcement at DCComics.com:

King elaborated on Twitter, explaining "we were going to do 7 issues of HiC and 2 HiC 'specials,' and instead we (I) decided it would work better if we incorporated the specials into the numbering." So this isn't a big change (and also probably explains the mysterious disappearance of that Harley Quinn and Poison Ivy Heroes in Crisis prelude special that was solicited by Dynamic Forces back in July). Good to know.

Also of note is King's recent description of Booster Gold's role in the series. He spoke to Kiel Phegly of CBR.com:

CBR: Is there a piece of DCU lore or a corner of the comics that might not be central to the action that you really wanted to bring in just to play with it in some small way?

King: There are C-level characters that are fun. I mean, Booster Gold! The trinity are the stars of the series, but the other two star characters are Booster and Harley. Booster to me doesn't seem like a character I'm pulling off the shelf because he feels like someone at the heart of the DCU. Maybe I've been watching too much Justice League Action over and over with my kids. He's the center of that show, and he's amazing.

That's not so good to know. While I agree that Booster is amazing, I'm not eager to see JL Action's goofy interpretation become his dominant characterization in the mainstream DCnU. (Does anyone remember what Elongated Man, Doctor Light, and Jean Loring were like *before* Identity Crisis? Just saying.)

Buy Heroes in Crisis #1 from your Local Comic Shop and make Skeets happy.