The Black Beetle Is the Time Master

This is the third part of our investigation of Black Beetle's secret identity. Follow these links to Part 1 and Part 2.

He's come from the future in his own a Time Sphere (Booster Gold #6). He knows a thing or two about the history of the Blue Beetles (Booster Gold #5). He "says wild stuff to throw you off your game" (Booster Gold #26). Sound like anyone we know?

While it's possible that Booster Gold is the Black Beetle, it wouldn't be very satisfying. Let's face it, Booster isn't the most heroic of heroes, so seeing an "evil" version of our favorite morally-grey time-traveler wouldn't be much different that Peter Platinum from Booster Gold #1,000,000 or the bartender in JLA Classified #8. It is certainly hard to imagine a Booster Gold who would destroy the universe for a scarab instead of just manipulating time to make a profit on the stock market.

No, the clues scattered through the second volume of Booster Gold and Time Masters: Vanishing Point indemnify someone else. Someone who shares Booster Gold's bloodline. Someone whose real identity remains a mystery to our Corporate Crusader. 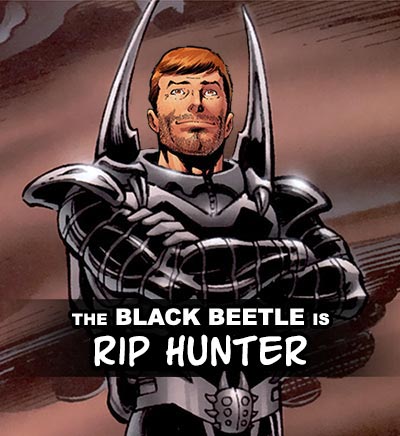 In Booster Gold #26, Skeets refuses to share the scans of the Black Beetle with Rip Hunter, doubting that Hunter will follow up on the information the scans contain. Why would Skeets question its programmer, Rip Hunter, unless there was evidence that might throw doubt on Rip's integrity or benevolence? Skeets has never had any qualms about turning over information on Booster if it was the right thing to do. (Remember that Skeets sided with Superman against Booster in Booster Gold volume 1 #7.) So what would make Skeets reluctant to cooperate unless there was evidence that Black Beetle and Rip Hunter were the same person?

Most of the clues that point away from Rip Hunter can be ascribed to the Black Beetle's self-professed affinity for misdirection, as stated in Booster Gold #21. However, in that same issue, there is a confrontation between Rip Hunter and Black Beetle that makes it fairly clear that neither knows the other's identity. How can we account for this failure for each to recognize the other as himself? And why would Rip Hunter program Skeets with the autonomy to defy him if he was really up to no good?

Given that we're talking about comic books, it's possible that Rip is suffering from some condition transforming him into an amnesiac Jekyll and Hyde. It's also possible, as Russ Burlingame suggested in the Boosterrific Forum in 2011, that Rip Hunter has an evil brother he doesn't know about. (Twins do run in the Carter family, after all!) I think a far more likely explanation lies not in the Carter family genetics but in the in Carter family business: time travel. Black Beetle is Rip Hunter, but not the Rip Hunter from the timeline we know.

Think this solution is far fetched? Consider the Linear Men who appear in Time Masters: Vanishing Point. They are DC Comic's original post-Crisis on Infinite Earths time police, and they, too, have their own version of Rip Hunter who is different than the man we know as Booster Gold's son. The Rip Hunter seen in Legends of the DC Universe 80-Page Giant #1 cannot be the Rip Hunter we know. Just as Matthew Ryder and Waverider are the same man from different timelines, the Linear Men's Hunter and ours must be alternate history versions of the same person. (Keep in mind that the Linear Men, Matthew Ryder, and Waverider were all created by the same man who wrote the aforementioned Legends of the DC Universe: Dan Jurgens!)

Black Beetle tells us that the willingness of the Linear Men to tolerate survivors of alternate histories is what led to their falling out with Rip Hunter in Time Masters: Vanishing Point #3. We can't take Black Beetle's word for anything, but his story is corroborated by the Linear Men themselves in the very next issue. Is Black Beetle giving us a hint to his own origin?

While both Black Beetle and Rip Hunter might be "Joshua Carter" (note the repetition of the "Jo-" prefix in the name of both Booster and his father, Michael Jon and Jon "Jonar" Carter), by the very nature of alternate timelines, the history that created Black Beetle will differ from whatever events led to the birth of our Rip Hunter. Our Rip Hunter knows who his family is and took up the family business. Black Beetle may not even be aware that Booster Gold is his father despite inheriting his father's talent for time travel and affinity for all things Beetle! This would explain why Black Beetle would be willing to kill his own ancestor, Daniel Carter, in Time Masters: Vanishing Point #6. It wouldn't be the first time a comic-book orphan turned to evil owing to a lack of parenting! 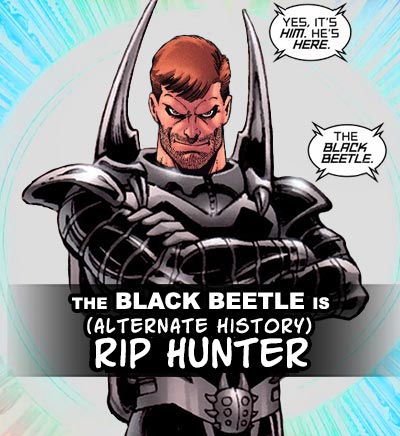 Time Travel is dangerous business. Change the smallest bit of history, and heroes become villains. Will we ever know the "true" identity of the Black Beetle? Only time will tell.

Xylob posted on Sep. 17, 2014 at 10:02 AM
It's the Time Trapper, working toward his ultimate goal of re-creating/re-populating his pocket universe.

J posted on Sep. 17, 2014 at 4:49 PM
Great read, thanks for writing, I"m having a hard time keeping up with everything in the BOoster universe. All those time issues really scrambled things and then Flashpiont then new 52 has been horrid for the most part.

Bob Rossetto posted on Sep. 17, 2014 at 10:31 PM
according to DC's official answer to my letter to them in Booster Gold #43 all the Rip Hunters are the same person. So the last theory has to be wrong, unless in futures end they are making him an alternate Rip Hunter.

Boosterrific [Official Comment] posted on Sep. 17, 2014 at 11:19 PM
To quote the response to your letter by editor Rex Ogle: "Rip Hunter has had lots of different incarnations." I do not interpret that to mean that there is and only has ever been one Rip Hunter. Superman has had lots of incarnations since 1938 as well, but there is certainly more than one Superman (a premise that DC's current MULTIVERSITY comic explores).

As chronicled by the Rip Hunter fan site Adam Arnold's Vanishing Point ( http://www.adamarnold.net/riphunter/realities.html ), there have been multiple incarnations of Rip Hunter in DC publications since his first appearance in 1959 that cannot be easily reconciled into a single individual.

Future events may prove that Black Beetle is not any version of Rip Hunter, but I see no evidence from Rex Ogle to contradict my theory.


Ryan posted on Sep. 18, 2014 at 10:27 AM
Thanks for all the work! I now agree Rip seems like the one, im not sure about the alternate future angle, but I think It can be him one way or another.