Cover Description: Superman poses with Lex Luthor and other members of his supporting cast. (No Booster Gold.)

Brief Synopsis: Superman leads the fight against the universe-destroying Monitors.

Issue Notes: This book was originally released online at Comixology.com in three installments (Chapters #4-6) for 99¢ each. The only difference in content between the print and digital releases are the inclusion of advertisements in the printed edition.

Story Notes: This mini-series continues the adventures of Superman from the series Smallville Season 11. 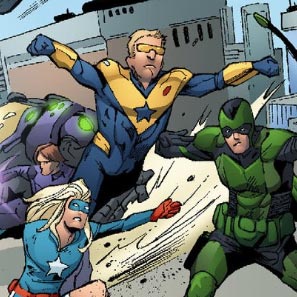 Page 10, panel 3
Booster leaps into action with the other heroes (including Speedy, Zan, and Jayna who were not pictured in a previous panel). Skeets is nowhere to be seen.

Page 11, panel 1
Again, Booster is seen charging into action without Skeets. This is the last appearance of Booster in this issue, and given that Smallville Season 11 has been canceled, his last appearance in this series. His fate remains unknown, but given that the Monitors have been erasing the future back to the present, it is possible that Booster Gold was removed from history (similar to his fate in Zero Hour).