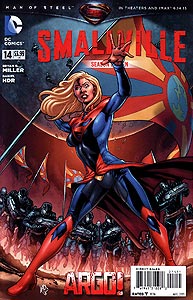 Brief Synopsis: Booster Gold searches the 31st century for the answer to why his powers have been disabled.

Issue Notes: This book was originally released online at Comixology.com in three installments (#47-49) for 99¢ each. This print edition has a cover price of $3.99 — $1.02 more than the cost of the digital issues combined — and for this extra expense this book contains 2 additional pages of original art and character sketches, a 2-page synopsis of Smallville season 7 (episodes 11-20), the DC Comics All Access page, and 11 pages of ads.

Page 11, panel 1
Booster Gold and Skeets are with Brainiac 5 in a Legion of Super-Heroes safe house somehwere in the middle of a wheat field. Could this safe house be somewhere in 31st-century Smallville?

Page 12, panel 3
Booster Gold reveals his Smallville origin story. Unlike in the DC Universe, Booster's appropriated Flight Ring explicitly belonged to Superman. No mention is made of Booster's force field, which in the DC Universe was created by Brainiac.

Page 12, panel 4
Booster confirms that he is not a natural blonde. This is a nod to the actor who played Booster on television's Smallville, Eric Martsolf, who has brown hair. In the familiar DC Universe, Booster is most definitely a natural blonde. 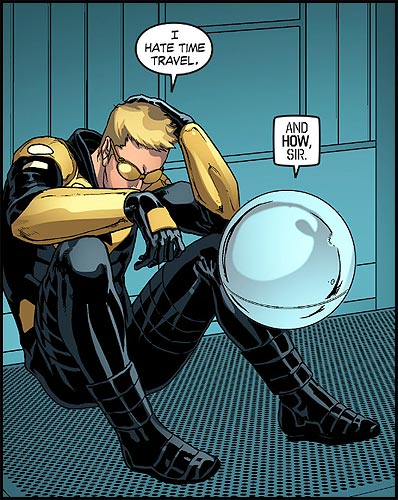 Page 18, panel 5
Saturn Girl activates Legion Protocol 6, which was responsible for teleporting Booster and Superman from the 21st to the 31st century. That the Protocol was activated after Booster was retrieved by it is, as Brainic 5 says in his best Mr. Spock impersonation, "fascinating."

Page 21, panel 5
Even though Booster has no powers, he still leaps into action to save an alien from overzealous EarthGov military forces. Skeets projects an anti-gravity force field to allow Booster to fall several stories without harm. Is Skeets the source of this Booster Gold's force field?

Page 23, panel 5
Heroic to the end, Booster and Skeets are overpowered and captured by the EarthGov forces, but not before freeing the innocent alien.