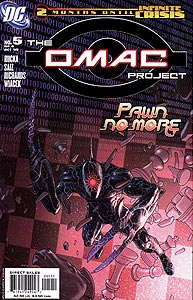 Brief Synopsis: Brother Eye unleashes the full force of the OMACs against the DC Heroes.

Issue Notes: This miniseries is one of four that lead into the Infinite Crisis mini-series. In this issue, Booster Gold and the Justice League International fights back against the OMACs.

Issue Reprints: This issue has been collected in The OMAC Project.

Page 5, panel 2
POWER DOWN: Seen through the computer display of Brother Eye, Booster Gold directs the team against the Brother Eye. One of Booster's long hidden strengths is his very rarely demonstrated leadership ability, honed as the greatest quarterback of the 25th century. On the computer displays in this page, it is clear that the Brother Eye views Booster as a low level threat, classifying him as an "Epsilon" threat. Epsilon is the fifth letter in the Greek alphabet, behind Alpha, Beta, Gamma, and Delta. Booster's companions are all presumably higher "Alpha" and "Beta" threats except for Fire, who is also an "Epsilon." 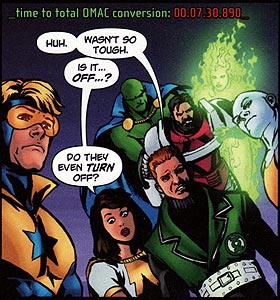 Page 7, panel 3
Despite apparently defeating one OMAC units, two more rise to take its place in combat against Booster and company. OMAC, or Observational Meta-human Activity Construct, is a nanobot virus dominated human being, manipulated by the Brother Eye to combat super-powered individuals.

Page 10, panel 2
POWER DOWN: After admitting that he cannot remember "who dies here," Booster vows that the OMACs will not kill another of his friends. Booster reveals to Rocket Red #4 his plan to detonate his power supply in close proximity to the OMACs to destroy them in a suicide attack. But when Booster's power suit is destroyed by a concentrated blast from an OMAC...

Page 11, panel 5
SPOILER WARNING!: ...it is Rocket Red #4 who sacrifices himself to destroy the OMACs as Booster can only watch. As his dying words, Rocket Red asks Booster to tell his family that he loves them. Rocket Red is the 5th member of the Justice League International to die, following Ice, Sue Dibny, Blue Beetle II, and Maxwell Lord to the grave. In hindsight, Booster's comment and willingness to sacrifice himself to the OMACs implies that he was aware that someone would die during the confrontation. Reveal

Boosterrific Review: At last the heroes respond to the threat of the Brother I satellite with satisfying violence, their stock-in-trade (which, to be fair, is the reason that most of us read the genre of super hero comic books). The art of Jesus Saiz sparkles as the Justice League International returns to form against OMAC agents. Once again, another minor character is sacrificed for the story, but at least this death feels entirely organic, if sadly tragic.