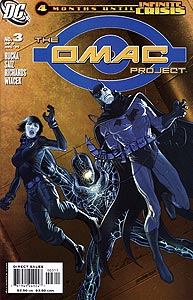 Cover Description: An OMAC unit seizes both Sasha Bordeaux and Batman around their necks from behind. (No Booster Gold.)

Issue Notes: This miniseries is one of four that lead into the Infinite Crisis mini-series. In this issue, Booster plans revenge against those who harmed his best friend, Blue Beetle.

Issue Reprints: This issue has been collected in The OMAC Project.

Page 1, panel 8
Seen via a computer monitor, Booster Gold and Wonder Woman fly past a satellite in space. Booster is clearly using his force field to protect him from the vacuum of space.

Page 11, panel 3
Wonder Woman and Booster have been searching the Earth's orbit for signs of Batman's missing Brother One satellite. The pair presumably communicates by means of an unseen electronic device. However, Wonder Woman wears no helmet, so how her device could be transmitting her voice is unclear.

Page 12, panel 1
Booster and Wonder Woman are joined by Guy Gardner. Gardner, once again a Green Lantern following the recent restoration of the Green Lantern Corps, has never expressed much affinity for either Beetle or Booster, but he is definitely interested in retribution for an attack on a fellow Leaguer.

Page 13, panel 4
Booster halts a fight between Gardner and Wonder Woman. Booster's role as peacemaker is a bit surprising here. In the previous issue, Booster was the first to engage in violence when he attacked Batman.

Boosterrific Review: The pace picks up in this issue as an emotional Booster Gold leads a team to avenge the death of Blue Beetle and Batman is forced to deal with the repercussions of his own paranoia. While the tone of the issue is very dark indeed, this issue is exemplary of the mood that has enveloped the DC Universe in recent months.