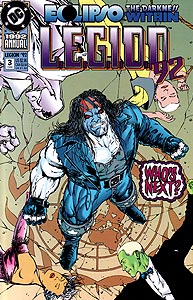 Cover Description: Lobo, under the control of Eclipso, stands on a floor decorated by the symbol of the United Nations, surrounded by the bodies of, clockwise from top right, Lady Quark, Vril Dox II, Stealth, and Strata. (No Booster Gold.)

Issue Notes: The story in this issue ties into the summer-long "Eclipso: The Darkness Within" storyline running throughout the 1992 DC annuals.

Page 11, panel 2
Booster Gold is among the delegates in attendance as the extra-terrestrial L.E.G.I.O.N. ("Licensed, Extra-Governmental Intergalactic Operatives Network") is introduced to representatives of the United Nations. Others in attendance include L.E.G.I.O.N. operatives Garv, Phase, Stealth, Strata, Telepath and Justice Leaguers Fire and Ice. This is Booster's first meeting with the cosmic L.E.G.I.O.N. team.

Page 51, panel 4
Responding to a distress call, the Justice League interrupts a fight between L.E.G.I.O.N. members Lobo and an Eclipsed Lady Quark. Based on the League's history with Lobo (beginning in Justice League International #18), it's no surprise that Booster assumes that Lobo is the cause of the alarm and leads Fire and Ice against him, allowing Lady Quark to escape.

Page 53, panel 2
Booster gives chase to Lady Quark, but she proves too powerful an opponent for the ill-prepared hero. Instead of getting answers, Booster finds himself getting rescued by Garv, the very being who Booster had aided earlier in the day.

Page 56, panel 4
Booster states that arrogant L.E.G.I.O.N. leader Vril Dox II reminds him of someone. That someone is likely Maxwell Lord, backer of the Justice League, though Booster could also be thinking of the villain Brainiac, Dox's father, or Legion of Super-Heroes member Brainiac 5, Dox's descendant, both of whom Booster has previously met.

Boosterrific Review: This issue-long slugfest is far more accessible to the casual reader than a typical issue of L.E.G.I.O.N., which is in fact one of the most enjoyable of the Eclipso crossover storylines in the 1992 DC annuals. About as good a 56-page fistfight can get.