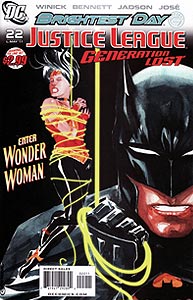 Cover Description: There are two covers to this issue, neither of which features Booster Gold. (Batman dangles Wonder Woman by her golden lasso on the standard edition and Batman and Power Girl battle OMACs on the 1:10 variant edition.)

Brief Synopsis: The Justice League International capitalizes on new information in their fight against Max Lord.

Page 1, panel 1
SPOILER WARNING!: This issue picks up almost immediately where the last issue leaves off, with Blue Beetle standing in front of Booster Gold, Captain Atom, Fire, Ice, Rocket Red, and Skeets. And yes, as simple as it is, the previous sentence does contain potential spoiler information. Reveal

Page 3, panel 1
Note that Skeets is trying to get a word in with the rest of the excited Justice League International team. Nowhere is it more apparent that Skeets is not just Booster Gold's sidekick but an actual member of this team.

Page 6, panel 1
According to series writer Judd Winick as revealed in an interview with Vaneta Rogers of Newsrama.com on March 23, 2011, "Max [Lord] made the JLI able to remember him, wanting them to chase him and do his bidding and help him take down Checkmate." Therefore, the ability of the JLI to remember Lord isn't a side effect of their location in issue #1, but an inentional effect of Lord's global bainwashing.

Page 12, panel 4
Again, according to Winick via Newsarama.com, "I wanted to get [the reason why no one remembers Wonder Woman] in there, but it never quite worked, and I hope the story hasn't suffered for it." So the exact reason that Power Girl cannot remember Wonder Woman remains a mystery (though it likely has to do with events in Wonder Woman's own series, where her history has been changed by the gods).

Page 13, panel 5
Batman, on the other hand, explains that his memory is intact because of his interaction with the White Lantern (as seen in Brightest Day #14).

Page 14, panel 1
Rocket Red seems unaware that for the better part of the recent past, Batman was presumed dead. Booster Gold knows otherwise, as he was very active searching the time stream for signs of Batman as seen in the Batman: The Return of Bruce Wayne and Time Masters: Vanishing Point mini-series.

Page 15, panel 2
Batman immediately proves his worth to the JLI by leading them to Wonder Woman, who appears to have as little memory of the Justice League International as some of its members have of her.

Boosterrific Review: Gee, this seemed like a short issue. That's probably because I enjoyed reading it so much.