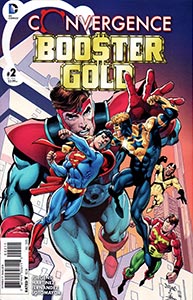 Cover Description: There are two covers to this issue. The first is a battle scene of Booster Gold in a fight with Superoby and the Legion of Super-Heroes. The alternate cover is a close up of Booster Gold from Justice League International Annual #1.

Brief Synopsis: Booster Gold dies. Or does he?

Page 2, panel 2
Why an experienced time traveller Booster Gold would be surprised to see Ted Kord alive is not explained. The pair have met several times since Ted's death. Maybe his degenerating chronal disease is making him mentally unstable.

Page 4, panel 5
HIS STORY: Metropolis General is the hospital Booster was in when he first got sick in Booster Gold Volume 1, #13. Booster's probably just doesn't want another run in with that judgmental nurse Devlin.

Page 5, panel 1
Beetle is referring to the 1966 Start Trek episode "Miri," where the crew of the USS Enterprise contract a disease that considerably accelerates their ageing process.

Page 5, panel 6
FASHION ALERT: Booster's response to Blue Beetle's question about "the weird symbol" on his chest is the closest thing we've gotten to any explanation for the new Advanced Research Group Uniting Superhumans (A.R.G.U.S.) branded suit of armor that first appeared in the Justice League International Annual. Booster dodges the question. Why is Booster wearing it? The world may never know.

Page 7, panel 5
POWER UP: Invisible Kid references the brief appearance of the original Booster as seen in Booster Gold: Futures End, reinforcing the probability that all of Booster's recent trips through different continuities (including the adventures in All-Star Western) were really trips through space on the planet Telos.

Page 11, panel 3
Beetle guesses that Booster is from 15 years in his future. If Beetle was in his early 30s in the mid 1990s (see Justice League Quarterly #7 for reference), that would make this Booster Gold at least 45 (or considerably older, considering his job as a Time Master leads him to experience time in a non-linear manner).

Page 11, panel 6
Booster is dying from exposure to the chronal radiation of "unprotected time travel." This has been a danger to DC Universe time travelers since Crisis on Infinite Earths. Dan Jurgens has explored the concept in both volumes of Booster Gold and issues of Superman.

Page 14, panel 1
The first dialogue balloon in this panel should be directed to Booster Gold.

Page 14, panel 2
Booster's sister, Michelle, and his son, Rip Hunter, arrive with the New 52 incarnation of Booster and Skeets. While it's touching that Booster's family is by his side as he is dying, but it is a shame that Booster's wife and the Skeets from his native continuity cannot be here. 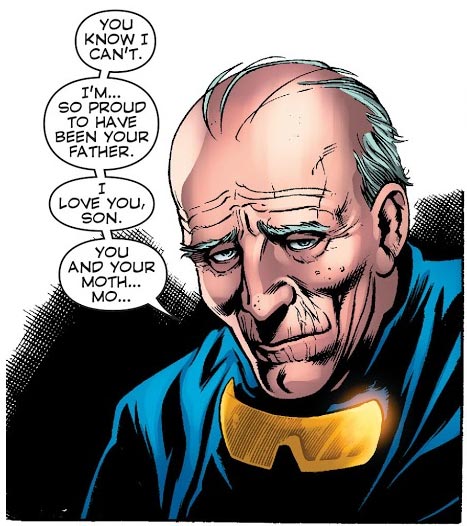 Page 16, panel 1
Another dialogue balloon error! The balloon tail implies only one person is speaking, but it should probably be two people: Ted Kord and Booster Gold.

Page 17, panel 1
Blue Beetle's description of the situation strongly mirrors the events of the main Convergence title, where Deimos manipulated the heroes in his bid to gain dominance of all time and space.

Page 18, panel 3
Rip Hunter's belief that becoming a being of pure chronal energy might seem like a longshot, but it is exactly what happened to his nemesis Rex Hunter in Booster Gold, Volume 2.

Page 19, panel 4
SPOILER WARNING!: Following his death in the heart of Vanishing Point, Booster Gold is reborn as Waverider. The original Waverider, Matthew Ryder, was born from time travel experiments in Armageddon 2001. With power over time itself, Waverider helped Rip Hunter police the time stream before being killed by a Mister Mind-controlled Skeets in 52. Waverider was co-created by Dan Jurgens and Archie Goodwin. Reveal

Page 21, panel 5
As Waverider sends Rip and Michelle into hiding, he vows that Rip Hunter's and his mother's true names "must remain a mystery." Aw, shucks. I guess we're never going to find out why Booster was wearing A.R.G.U.S. armor at the start of this issue, either.

Boosterrific Review: It's not Dan Jurgens' or any of the artists fault this isn't a perfect book. It's an enjoyable read that advances the story of Booster Gold. Or I should say, at least one Booster Gold. And therein lies the problem. While this book concludes a two-part roller coaster ride, it doesn't settle much of the lingering confusion about who Booster Gold is anymore in the wake of Flashpoint. If you're not looking for the bigger picture (and like time-travel tales), you'll enjoy this book.