Brief Synopsis: Booster Gold struggles with the loss of his friend, Ted Kord.

Page 2, panel 3
A quiet, reflective moment in Rip Hunter's Time Lab is ruined for Booster Gold and Skeets when Rani gets her hands on the Goldstar uniform. Michelle, as usual, is quick to blame Booster, though Rip Hunter will remain his typical, emotionally distant self.

Page 3, panel 6
The phrase "reverse the polarity" is among the most cliche of all science fiction tropes. It is widely considered to have originated on the long-running British science-fiction television show Doctor Who, though it can be found in almost every science fiction series since when a bit of techno-babble is required to solve a seemingly impossible problem.

Page 6, panel 1
Booster Gold is "on patrol" in Highland Park, Illinois, the former home of the Ted Kord. Skeets' comment that Booster has never been on patrol is quite accurate: Booster generally responds to known trouble situations or schedules events, but he has never wandered the streets looking for random crime like Batman or Superman.

Page 8, panel 3
Skeets is wrong. Under Illinois state law, Booster Gold can, as a private citizen, "arrest another when he has reasonable grounds to believe that an offense other than an ordinance violation is being committed," per the Illinois Code of Criminal Procedure of 1963 (725 ILCS 5, Title II, Article 107-3).

Page 9, panel 2
The latest small-time thief to be apprehened by Booster Gold calls himself "The Booster," an appropriate sobriquet. The Booster plans to be a Robin Hood-type figure, stealling jewelry from the rich to give to the poor. Booster Gold, on the other hand, only stole from museums to give to himself. 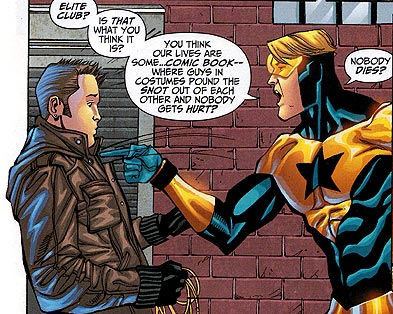 Page 9, panel 5
Booster's anguish has triggered a break with reality wherein he fails to recognize that he is no longer speaking to The Booster but instead his deceased friend, Ted Kord. Booster has previously been moody and emotionally unstable, but he has rarely expresed such severe, if temporary dementia.

Page 20, panel 1
Ted Kord's grave is seen protected by various force fields through several points in time, including the present,...

Boosterrific Review: This issue's in-depth investigation of Booster's emotional state and how poorly he has dealt with the loss of his best friend Ted Kord was a refreshingly brutal bit of character study. It is especially satisfying in the wake of recent Booster stories that have been very heavily influenced by attempts to recapture the slapstick past of Blue and Gold of the JLI days.

(6 votes)
KMD (Jan. 6, 2011, 13:41:23)
I enjoyed the issue--and it was nice to see a bit of development with Booster. Even Michelle is starting to grow on me a bit. Having said that, I also concede that this could be the result of lowered expectations based on recent issues.
ncllcn (Dec. 16, 2010, 23:35:39)
Thought this was a good way to have Booster truly come to terms with Ted's death and FINALLY begin to move on. Sure both Johns and Jurgens had issues dealing with Ted but none of them resolved much as far as Booster moving on. This issue and arc were needed to keep this comic from being weighed down by every new writing staff resorting to the crutch of doing a Booster deals with the loss of Ted story. Frankly it's a tired subject and would really hurt this series if it continued to arise every dozen-or-so issues. Sure I love the old JLI stories and the classic Blue and Gold team-ups as much as the next fan but for Booster Gold, the character and series, to truly grow and develop that part of the past and Ted truly need to rest in peace. Great issue and well needed.
Harry (Dec. 15, 2010, 13:44:41)
This story would have have more impactful if the central issue hadn't been addressed earlier in the series. Still, I thought it was well done, if a bit melodramatic.
tiggerpete (Dec. 14, 2010, 23:55:05)
I loved this issue, really its Booster saying although e can go visit Ted any time he wants, he can't keep living in the past, and has decided that although he will never stop missing Ted, its time to move on with his life.
Erin (Dec. 14, 2010, 15:31:58)
This issue it seemed to be very out of place. Having read through Boosters' grief under the previous runs it was very jarring to suddenly having him go back to the denial stage. It really didn't fit. The Dead Ted arc in particular gave the impression that Booster had accepted Teds' death and supported Jaime as his successor. As such I couldn't get into it or the idea implied on the last page that Booster never gets over Teds' death. This feels like an issue better suited during Johns run and drives home the fact that the past few JLI issues had nothing to do with the Gen Lost tie ins anyway. It wasn't about the unexplored area of Boosters' feeling on confronting his old friend Max but STILL about Ted. Even more odd is that Booster is visiting an empty grave as Ted was actually buried at the Vanishing Point. I did enjoy the family moments even if I felt Michelle shouldn't be quite as mean. Still I'd like to see new stories not re-trend ideas other writers already explored.
Superman (Dec. 13, 2010, 09:19:57)
I'll have to say I'm less than impressed compared to our host. The story is not original. That's not to say that this issue is bad. It actually had its moments. I like that it is straightforward, I like that Giffen and DeMatteis dropped their joke-a-minute tone for emotional and vulnerable, and I like how devoted Booster is portrayed from those panels in page 20. But we already had something similar to this in the Blackest Night-tie in. This issue looks good, I think, only because the previous ones were so terrible. I do hope, though, that this issue signals a more disciplined story for the team's new storyline.