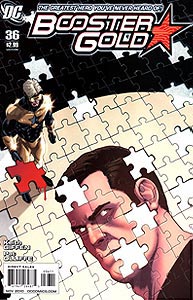 Brief Synopsis: Trying to save Blue Beetle, Booster Gold finds himself at the dawn of an interplanetary war.

Page 9, panel 1
Booster Gold and Skeets walk in on Rip Hunter in his Arizona Time Lab. The pair are discussing their adventures in Justice League: Generation Lost #7 through Justice League: Generation Lost #9 which interrupted the action in this issue. Booster holds in his hands the collar that he adds to his costume to transform it superficially into his Mark I powersuit. (For more details on this costume change, see annotations earlier in this issue here.)

Page 10, panel 3
Looking for Blue Beetle, Booster Gold and Skeets finds themselves in the bedchambers of Queen Artemis, interrupting their conversation about the transient nature of death in the DC Universe. Booster's inclusion of Batman in his list of the reanimated clearly indicates for the first time that the events of the Time Masters: Vanishing Point mini-series must have at least started prior to the publication of this issue. (If Booster can teleport himself into a Boom Tube, no doubt he can participate in the mid-point of two comic book stories simultaneously despite their apparent chronal incompatibilities.)

Page 10, panel 5
SPOILER WARNING!: Chip 'n Dale are a pair of animated chipmunks that have been appearing in cartoons produced by the Walt Disney Company since 1943. Beetle mentions them because he has been transformed into a chipmunk himself by a spiteful Queen Artemis. But of course, you knew that. Reveal

Page 12, panel 1
Booster Gold learned this lesson in Booster Gold, Volume 1, #7 with the help of Skeets and Superman.

Page 12, panel 5
For a second time, Booster is confronted by Darkstar Phil and his still unnamed partner.

Page 13, panel 4
Continuing his Walt Disney-themed hijinks, Beetle sings "When You Wish Upon a Star," a song from Disney's 1940 Pinocchio. While the Darkstars may not care for it, the Academy of Motion Pictures Arts and Sciences sure did, granting it an Academy Award for "Best Original Song." Disney would later chose the song as the theme for a television show.

Page 14, panel 1
Starlag Containment Craft is a space-station prison run by the Citadel race in the Vega system of the DC Universe. The name of the prison is a pun on the German prisoner-of-war camps of World War II know as "stalags." If this is where Booster Gold and Blue Beetle have been incarcerated, Queen Artemis' planet is likely in the Vega system as well.

Page 15, panel 3
POWER DOWN: Booster explains that the Darkstars were able to turn off his powersuit through the user of a "neutralizing patch." It seems that if such a thing were effective, his time- and space-traveling foes the Time Stealers would acquire a patch for their use.

Page 16, panel 5
...and alien Dominators, both of whom he has encountered multiple times before.

Page 17, panel 1
Skeets debuted 25 years ago in Booster Gold, Volume 1, #1 in 1985. This panel includes its first 1st-person narration box! In fact, the page is full of them! (Skeets' first entire page of narration!) Hurray, Skeets, for finally being recognized as a thinking character and not just a simple automaton sidekick.

Page 18, panel 2
Though Booster battled the Alien Alliance in Invasion!, this is the first time that he has shared a panel with the Warlords of Okaara.

Page 19, panel 6
For someone who is intimidated around "really smart people," Booster has spent a lot of time around them in this issue. Vril Dox, Mister Miracle, Blue Beetle, and Rip Hunter would all be considered "really smart people" in the DC or any other universe.

Page 20, panel 3
How, exactly, does a flying robot become nauseated? Skeets has no stomach to be sick to, and it is unlikely that it would be offended by laundry or soap.

Page 20, panel 4
Skeets describes itself as an "upgraded BX9 Security Robot." Skeets first described itself as a "BX9 Security 'Bot" in Booster Gold, Volume 1, #8, but had since been described as a valet robot in 52 Week Two. Either Dr. Will Magnus was wrong about Skeets, or Skeets has since received a module change courtesy of Rip Hunter. (The latter seems most likely, especially following Skeets' unfortunate possession by Mr. Mind.)

Boosterrific Review: Whew! This issue is all over the place! Fans of Giffen's and DeMatteis' trademark humor will find something to love in this issue. So will fans of DC history. And Blue Beetle fans. And Justice League International fans. And space opera fans. And, well, probably just about everybody. The book's only significant flaw is that the art of Pat Olliffe (pulling double-duty on pencils and ink) is very uneven, probably a side-effect of the book's breakneck plot and diverse plot elements.

(5 votes)
Kevin (Feb. 1, 2011, 13:00:36)
Vintage Bwahaha humor from Giffen & DeMatteis! Love it!!!
Harry (Oct. 18, 2010, 17:06:02)
Awkward and uncomfortable. This story should have wrapped up last issue and we should have moved on from the nostalgia trip. I was not amused by "chipmonk" BB and it seemed the story hinged on finding that one element funny. I was enjoying the previous issues of this story, it just fell off the wagon in this issue. What a waste of a great cover.
Superman (Sep. 22, 2010, 23:37:57)
It's all over the place, indeed. I'm inclined to give this issue 1 star, but I'll add a star anyway for my expectations. Giffen and DeMatteis better end this arc with something substantial.
Erin (Sep. 12, 2010, 01:17:53)
This was not one of my favorite issues. The repetition of the humor, the crudeness and the unsettling "joke" with Ted and the Queen made this issue a uncomfortable read for me. Like KMD already mentioned the tone seems to be at odds with the more serious things Boosters' trying to accomplish. BTW Boosters' hair looked a little faded in the future but I doubt he's going bald. Especially since no one else outside the JLI commented on it (although Giffin/DeMatteis might use that joke again.)
KMD (Sep. 10, 2010, 09:20:46)
While there were some fun moments, the book seemed a bit off, especially with Booster facing much darker plots in other comics right now. The art was a bit off.