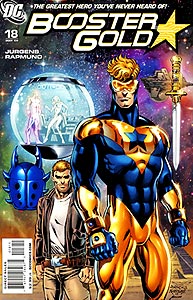 Page 1, panel 1
A PAIR OF DOCS?: Booster Gold, meet Booster Gold. When Booster Gold meets a alternate version of himself, he takes it pretty well. But such is to be expected from a hero who has traveled into his own future and used his own dead body in order to fake his death. (See the events of 52 for details.)

Page 2, panel 1
Booster has just discovered that his father is now his latest arch-enemy wearing Booster's discarded Supernova costume. The fact that he has trust issues regarding the sudden appearance of other relatives is not especially surprising, even if that other relative happens to be him. Fortunately for Booster, Skeets sets him straight.

Page 10, panel 5
A PAIR OF DOCS?: Booster Gold arrives to defend Michelle Carter from the mysterious figure who has stolen the chronal-charged Egyptian dagger three times from various points in history. Booster is surprised to find his twin sister Michelle alive after her apparent death way back in Booster Gold, Vol. 1, #22. Michelle's companion, Skeets, instantly recognizes that this is a younger Booster Gold than both he and Michelle were expecting, revealing either that Skeets is astonishingly quick with chronal scans or that Skeets is aware of the activities of the two Booster Golds. The second option is distinctly probable, as Skeets has revealed in the past that it has knowledge of past/future events that it chooses to keep to itself and a younger version of Skeets is currently accompanying the older Booster Gold on his mission to Egypt. (Though, were "future-tense" Skeets to have the knowledge of "past-tense" Skeets, it would not be confused about the identity of the current mysterious villain challenging Michelle, as that villain's identity will be revealed to the younger Skeets later in this issue. Ah, time-travel....)

Page 14, panel 5
The mysterious villain continuously calls Skeets an android. The word "android" typically refers to a robot designed to mimic human appearance. However, it can also be used to describe robots which may mimic human behavior, which Skeets certainly does.

Page 15, panel 3
The mysterious villain warns Booster of the evils committed by the "Black Beetle," who in some way is related to the Blue Beetle. (This would be foreshadowing if this issue had been published a year earlier.)

Page 16, panel 4
Booster learns the fate of Rex Hunter before it occurs. This is generally considered a no-no in time-travel stories, as knowledge of the future is empowerment for changing history according to the Relative Theory of time travel. For more information on the variations of time-travel theory within the DC Universe, see here.

Page 17, panel 5
Booster rejoins Future Booster in ancient Egypt and reveals to Future Booster the identity of the villain that had recently been troubling him. Since Future Booster seems surprised by this, it is possible that despite Skeets' earlier assertion, these two Booster Golds may be separated by more than just time.

Boosterrific Review: Booster Gold and Booster Gold join forces to kick some ass and foil the poorly explained plans of their shared deceased enemy. Like the preceding sentence, this issue starts with a terrific team-up, but soon bogs down in some rather confusing situations and a confrontation against an impossible enemy. Despite some puzzling fine details (which, let's face it, are generally irrelevant in the standard super hero slugfest), the book is worth reading based on the Booster Gold-Booster Gold team-up alone. Perhaps more significantly, the story provides for the long-necessary advancement of Michelle Carter's character, finally transforming her into something slightly more than a cardboard background figure.